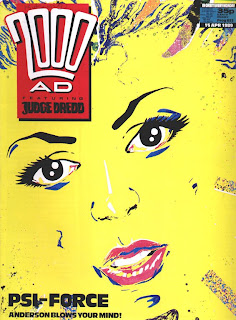 The welcome anomaly that does appear here is the one and only Judge Corey solo story, "Leviathan's Farewell," by Alan Grant and Mick Austin, a.k.a. the one in which Corey sees the last humpback whale die and then kills herself. It initially appeared in the 1989 2000 AD Sci-Fi Special, published at the beginning of May 1989, i.e. around the time of Prog 624--as Grant put it, "it was an important story in Cass's ongoing saga, and the asshole editor of 2000AD stuck it in a special where nobody's ever seen it." (Curiously, Corey's still alive and well as of the end of "Triad," from Prog 644.)

Anderson was very popular as a supporting character, obviously--of all the supporting characters in Dredd's stories she was the one who most seemed like a natural to spin off into her own feature. (It may be less that she's a great character on her own than that she's a great foil for Dredd: irreverent, inexact, emotional, and totally on the same page as he is.) Still, it's not clear to me as a reader why it initially seemed like having a second Judge-based series in the weekly was a good idea. It might have been a way of dealing with reader demands for more Dark Judges and more Anderson without having to do another "Dredd fights Judge Death" story--the stakes for the first two were pitched high enough that it couldn't have been easy to find another angle. 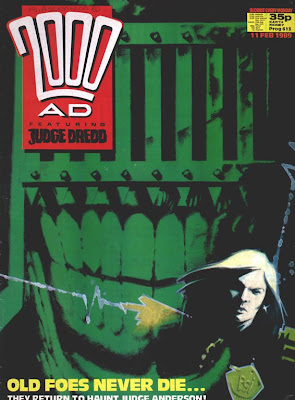 The question Alan Grant (and sometimes John Wagner) faced after that, though, was what kinds of stories it was possible to tell with her that it wasn't possible to tell in the context of Dredd's own series. Supernatural stuff, obviously, and squishy psychic phenomena, since those are hard to square up with the Dredd premise of "contemporary American cultural trends taken to outlandish extremes in a sci-fi context." (But that means they're also hard to square up with the Mega-City One setting.)
One other answer was that Judge Anderson could simply act as a second channel for Judge Dredd: adding to the backstory and moving characters into position. Anderson's first full-on serial, "Four Dark Judges," followed up on "Judge Death Lives," and established a basis for future Judge Death plots; "The Hour of the Wolf" set up the idea that the Apocalypse War wasn't so much the conclusive end of a cold war as the instigating event of a very long chain of resentment and revenge. 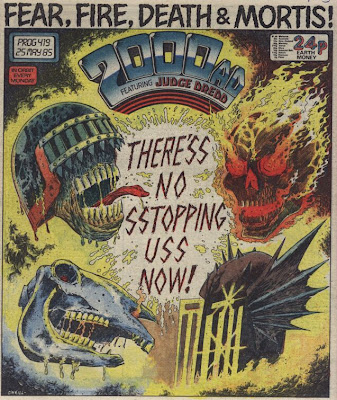 "Four Dark Judges" seems to have been a late enough addition to 2000 AD's lineup that three different artists worked on its twelve chapters. It's interesting to see how they each dealt with Brian Bolland's legacy of drawing Anderson and the Dark Judges. Brett Ewins pretty much goes his own way (and takes pains to show us how tight Anderson's outfit is whenever he can get away with it), but draws the Dark Judges very much on Bolland's model; Cliff Robinson takes his cues from Bolland all the way, right down to the way he draws shading and textures (he's always sort of done that, but more so than usual here), and emphasizes McGruder's Dan Dare eyebrows; Robin Smith follows Robinson's example, rather than Ewins' or even Bolland's--the look of his chapter is sort of Bolland at two removes, with a much shakier grasp of anatomy. (And Kevin O'Neill's cover for Prog 419, above, is an intriguing what-might-have-been.)
"The Possessed" is a much less focused story, though it has one terrific switcheroo: the familiar formula its first few chapters invoke is "hero goes into terrible place to rescue an endangered innocent," and Wagner and Grant crumple up the formula and throw it away halfway through. Also, one of its throwaway jokes (the "freeplumber" bit in the third episode) seems to be a callback to a gag from a Daily Star strip a few years earlier. 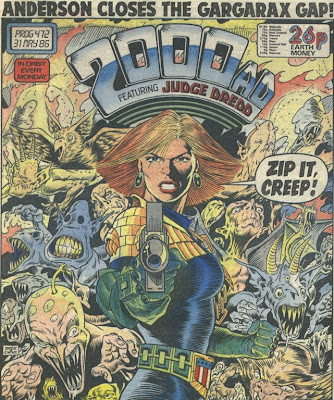 "The Hour of the Wolf" is probably the most dramatically effective single story here, although it's more an "ensemble of Judges who aren't Dredd" story than an Anderson feature proper--Anderson spends half of it unconscious and barely on panel. But it does establish Orlok as a significant presence in Anderson's life (that would be followed up on later) and East-Meg's exiles as an ongoing threat, and the ending reveals Cass to be a lot colder than we'd understood her to be before.
After Wagner's departure from the Judge Anderson feature, though, Grant's writing takes a significant dip. It's hard to make Anderson the focal point for satire like Dredd, so the stories don't tend to be particularly funny (the demon ram in "Triad" seems to have wandered over from a Dredd story, and seems far out of place). Anderson's not an action hero most of the time, either, and "very serious police procedurals about a psychic future cop" isn't a particularly exciting hook. And the flashes of sexiness don't quite fit either: Cass's shower scene in "Engram" just comes off as pandering.
Still, the back half of the book has its moments, especially "The Random Man," which owes its premise to Luke Rhinehart's The Dice Man (there's a "Luke Reinhart Alley," sic, mentioned near the end of it). This particular story was published in 1989, three years after the unsuccessful Dice Man spinoff from 2000 AD. It was also initially published in painted color, which means the black-and-white reproduction of Carlos Ezquerra's artwork is murk city. 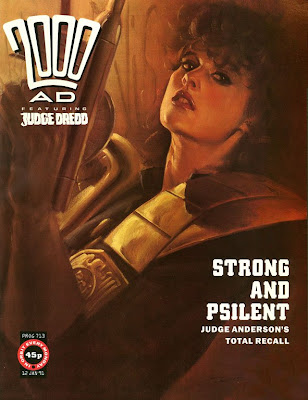 In other later stories, Arthur Ranson and David Roach both do nice-looking, serious-toned variations on photorealism; that school of artwork would look out of place in a Dredd strip, but effectively establishes that "this isn't a Dredd strip." One problem with both of their serials in the context of this big black-and-white omnibus, though, is that they're clearly working from photo-models for Anderson--and their models simply don't look like the character Brian Bolland first drew, and whose basic look stays much the same in Brett Ewins' and Barry Kitson's versions, and even Ezquerra's. (It's also kind of hard to believe that she's aging in real time: the character in "Engram" really doesn't look twelve years older than the character in "Judge Death." At least Hershey's been aging somewhat convincingly over time.) 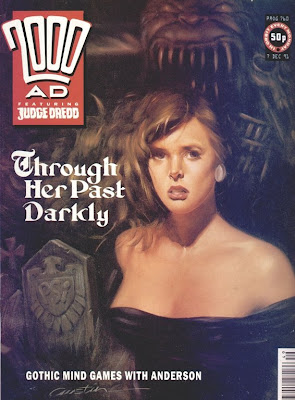 And I really have a grudge against the final chronological story here, "Engram" (initially serialized in two halves with a 41-week gap between them). Not only does it reuse the weary old Child Abuse Is Bad And Has Terrible Effects Later On plot device from "Triad," but its title is a very dodgy piece of rhetoric. The word "engram" doesn't seem to appear in the story itself, but it's got a very specific resonance here. In neuropsychology, "engram" is a term that's not used very often, but it refers to the idea that memory is stored in the brain in some kind of physical (biological/chemical) form. The meaning of "engram" that applies to this story, though, is the one that's basically only used in Dianetics/Scientology: a repressed, painful memory that exerts power over the subconscious mind, more or less. I don't know if that's what Grant intended, but it's what he ended up with.
Next week: back to the Complete Case Files with Volume 8, in which Dredd suffers a failure of nerve, and Wagner and Grant take a stab at another mega-epic, then think better of it.
Posted by Douglas Wolk at 11:00 PM