"The Dead Man" is an 81-page story wrapped around a single startling revelation. It's a black-and-white serial (launched in an issue whose cover promised "More Colour!"), credited to unknown writer Keef Ripley and former Luke Kirby artist John Ridgway; it's set in the Cursed Earth, which would make it part of this project even if "Necropolis" didn't pick up on some of its threads. And if you're reading the Dredd books in order and haven't gotten to it yet, you might want to close this entry right now and come back to it after you're done. 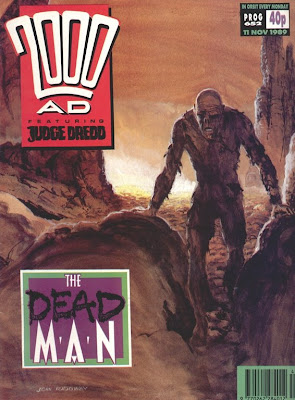 But before I get into it, one point of contention that I can't avoid mentioning. So you're writing a 2000 AD serial in 1989; it's got a black protagonist/narrator (good! a nice change from the 2KAD norm), who talks in a not-quite-grammatical argot that involves "wuz" substituted for "was" (less good), and has a deferential relationship to an older man, and seems to do the eyes-bugging-out thing a lot (dubious, although it makes sense on the grounds that his eyes eventually become a plot point). What in God's name suggests that "Yassa," of all things, is a good name for that character?

That said, talk to anybody who was reading 2000 AD around this time, and they'll tell you that "the 'Dead Man' reveal" blew their mind. John Wagner wrote the series as "Keef Ripley" so nobody would guess the Dead Man's real identity until he was ready to say so, and reading the final three episodes is like watching a chain of dominoes fall until the final domino sets off an explosion. (I will say, though, that starting the current edition with a left-hand page rather than a right-hand page does the story a disservice a couple of times toward the end: the climactic revelation in part 11 really ought to follow a page-turn, and the double-page image of Phobia and Nausea gets cut in half here. Also, I gather that this version was initially supposed to be called "Tales of the Dead Man," as in the version shown up top, but got changed to the shorter title at some point.)

It's also interesting that this is such an un-Wagner-like story in a lot of ways, especially in that it's about darkening mood rather than intricate plot. The premise starts as "a stranger comes to town" and turns into "a man goes on a journey." Aside from the one panel where the Dead Man reaches out for Yassa, there's nothing like an action sequence until the end of the third chapter. The conflicts with the grunts basically just seem to be there to provide conflict more concrete than the scary premonitions everyone keeps getting, and to demonstrate that the Dead Man's a crack shot.

At its core, though, this is 13 chapters of the Dead Man waking up, recuperating, figuring out his real identity and remembering what happened to him. In the city, his body reflects the city (he is the law, the law is the state, therefore he is the state); in the Cursed Earth, his body reflects the landscape too, as Yassa mentions the first time he sees him. The razed landscapes of the dead cities, and the burning acid waters, are scarier than the grunts or even the Sisters themselves: Ridgway's images of the ruins of Crowley are chilling because they're so minimal, nothing but a few charcoal-looking husks of beams and silhouetted ashes. 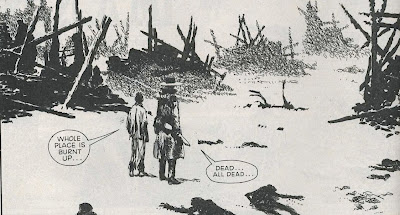 Colin Smith's lengthy discussion of "The Dead Man" mentions Yassa's throwaway line of exposition at the beginning of chapter 10--"my pap says it's chem pools in the hills turns the river bad"--as an example of Wagner's particular gifts. Rereading the story with the knowledge that Ripley is Wagner, you see some dry jokes that tip his hand, like the little girl named Flotilla, or the central-casting preacher Larry Larkin quoting nonexistent Scripture and getting called on it, or Yassa insisting that "Dog meat'll poison you! That's what it'll do!"

It's a very nice touch that Ridgway draws "The Dead Man" in a style that doesn't look much like his Judge Dredd work: it's a horror-Western, built around light sources slicing through shadow and cross-hatching. (Ridgway's inking here reminds me a little of Alfredo Alcala, actually.) I guess we know as of the cover of Prog 661 that Dredd's eyes are blue--or, at least, that the replacement eyes he got after "City of the Damned" are blue. Is the blinding of Yassa supposed to echo Dredd's in that story? It seems like a strange plot point to repeat without intentionally making something of it. 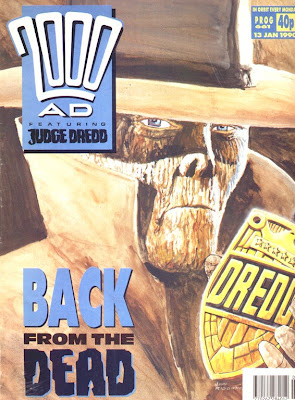 Yassa's diction on the final page abruptly gets a lot more eloquent after one more "wuz," just as the color fades in for the first time in the entire story (and note how Ridgway leaves most of the page's first panel in black and white, just letting sepia seep in at the edges: nice!). The only other time his narration shifts to that kind of fancier speech is when he's discussing remembering what happened later on ("It's a question I've asked myself many times in the madness where I now dwell..."). I wonder if the idea was originally that Yassa has grown to manhood in darkness and is narrating part of the story many years later; his return in "Necropolis" seems to have been more a spontaneous gesture than something that was planned all along. It's also odd that Dredd's talking in a more portentous mode than usual ("It will not return--not unless all goes ill with me!") even after he's recovered his memories.

The concluding bit of text on that last page of "The Dead Man"--"continued overleaf"--is brilliant: this is not just a story that ties into Judge Dredd, it's an "ending" that segues directly into the Dredd story that begins on the next page, which in turn springs out of Dredd episodes that have been running alongside "The Dead Man." (The coloring matches so well that I have to wonder if Will Simpson colored that final "Dead Man" page, too.) This is a story, in other words, that could only have its full impact at the time and in the way it was first told: as a serial running alongside another serial in a context where no one would have guessed they're as closely linked as they are. After that, the secret was out, as we see on the cover of the initial paperback collection, below (drawn by Sean Phillips). 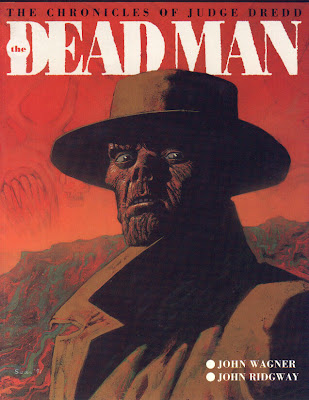 Next week: we pick up immediately after the final page of "The Dead Man," with The Complete Case Files 14, featuring "Tale of the Dead Man" and the whole remarkable "Necropolis" sequence.
Posted by Douglas Wolk at 11:00 PM