Cry of the Werewolf

First things first: I didn't have time to mention this here before last week's post went up, but I'm deeply honored to have been presented with the Krill Tro Thargo at New York Comic-Con. Thank you so much, Tharg and minions.

Just how Simon & Schuster picks what's going into their 2000 AD reprint program continues to mystify me a little, but that's why they're book publishers and I'm not--and in any case I'm not going to complain about color reprints of largely long-out-of-print stories. This one's kind of a Halloween-themed Dredd/horror volume, anchored by the title story, from Progs 322-328. (Is it the first Dredd collection with a sound effect on the cover?) Rereading "Cry of the Werewolf" now, it really seems like it was written one episode at a time, without thinking much about what was going to happen next. Judge Prager shows up four pages before the end to resolve the plot, and he's an inspired character ("How's things down there anyway?" "Grim"), but that's the first we've seen of him. It's also fun to see Manhattan as "the Undercity" in full-on Escape from New York mode, although Times Square looks... pretty much like it did in 1983. 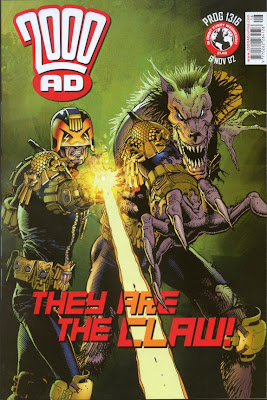 For all that, "Cry" is one of the smartest of the "Dredd vs. supernatural monster" stories that pop up from time to time. Dredd's favored method of thinking about problems is reducing them to the lowest common denominator, which is usually a bullet; he's not the Anderson type who prefers to work things out metaphysically. The virtue of this one is that it does let him treat lycanthropy as just another perp to be dispatched, and shows us the man-as-law turning bestial as he descends into the space that's both literally and figuratively below his customary realm of action.

Including Wagner and Carl Critchlow's "Out of the Undercity," from 2002, makes a lot of sense, since it's a direct sequel to "Cry of the Werewolf." (It's also Wagner writing in the mode of several decades earlier: the wreckage of "the old White House" is totally a pre-1985 move on his part.) The logical (but absent-from-this-volume) successor to that story, though, is the Judge Dredd Vs. Aliens serial "Incubus," which started a few weeks later, follows up the Mr. Bones plot thread from "Undercity," concerns a bunch of monsters doing horrifying things, and even ends with a moment of tension-breaking comedy, like "Cry of the Werewolf." I mean, it's understandable that it would be hard to sneak the Aliens creatures into a book with a werewolf on the cover, but still. 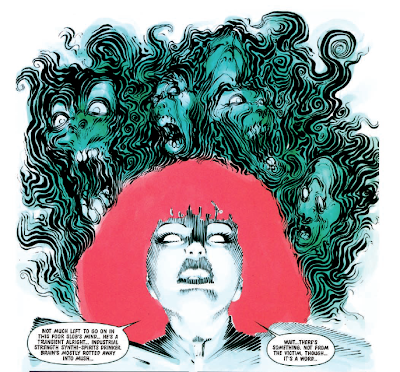 We also get Robbie Morrison and Leigh Gallagher's "Dog Soldiers," a "Tour of Duty"-era piece involving antagonists who look vaguely like werewolves but aren't. (I really like Gallagher's rendition of Dredd, who genuinely looks like he's in his late sixties and has been through a lot.) And finally--and out of chronological sequence--there's Gordon Rennie and Frazer Irving's "Asylum," which features a bad guy with big sharp fangs who isn't quite a werewolf either. Irving's got particular gifts for horror and for color design, both of which serve him well here: every artist's got a way of drawing Psi-Judge Karyn's hair, but Irving's rendering of it as a radiant glob of hot pink (see above) makes it look eerie rather than just gravity-defying. ("Wurdolak" is an unusual spelling of the monster here; it seems to be related to the Greek vrykolakas almost as much as the Russian vourdalak.) 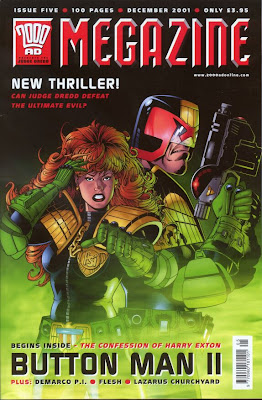 We don't, however, get to see the sequel to "Asylum," Rennie and Boo Cook's "Descent," which brought the Karyn/Wurdolak plot down into the Undercity, and has a genuinely scary/creepy ending. (Without "Descent," "Asylum" doesn't have much of a conceptual link to "Out of the Undercity.") It's possible to imagine a more-perfect-universe version of this book that would have gone "Cry of the Werewolf"-"Asylum"-"Out of the Undercity"-"Incubus"-"Descent." As entertaining as all four of the stories actually in this volume are, that one would have had a clearer overall dramatic arc--about the Undercity as the ugly subconscious space of the city from which monsters sometimes escape and in which monsters sometimes settle comfortably, and about Judges trying and often failing to look out for one another.

Next week: Laura Hudson and I take on the aforementioned Judge Dredd/Aliens crossover, Incubus.
Posted by Douglas Wolk at 11:00 PM