Lenny Zero and the Perps of Mega-City One

The U.S. and U.K. 2000 AD reprint programs have generally been closely synched up over the past few years, but occasionally they clash a little bit. The first Mega-City Undercover volume, published in the U.K. a few years ago, included all three Lenny Zero stories, as well as the first few years' worth of "Low Life." That got redistricted for the American market: Low Life: The Deal includes all but one of those "Low Life" stories, and the Lenny Zero material was moved over to this "Mega-City One's criminal underworld"-themed volume, filled out with all the appearances to date of Bato Loco and Slick Dickens, plus a couple of unrelated Robbie Morrison-written Dredd stories that involve, you know, criminal activity. 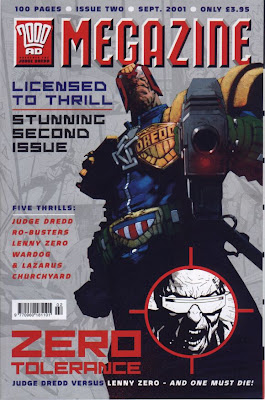 The selling point, obviously, is the Andy Diggle/Jock team that created Lenny Zero: the cover text suggests that the volume was put together to capitalize on the Losers movie that was based on their incarnation of the long-running DC franchise. (There wasn't much capitalizing to be done, but never mind that.) Diggle and Jock have also collaborated on a pretty good Green Arrow miniseries, and their new project "Snapshot" is about to debut in Judge Dredd Megazine.

"Lenny Zero," though, was their first work together. That first story, in particular, is just terrific: it follows Diggle's "shot glass of rocket fuel" editorial directive, frontloading a series of plot twists that would each be the concluding surprise in a lazier story, and getting through an enormous amount of story in ten pages by establishing relationships very quickly with dialogue and judiciously compressing anything that doesn't involve violence.

Its two sequels, though, aren't nearly as neatly constructed--which may be the peril of an editor writing for himself. As clever an invention as that easygoing robot truck driver is, his scene is spoiled by the lazy stereotypes of the hijackers (see also: Bato Loco later in the volume). What is it with comics writers who think an accent and a few Spanish phrases are surefire comedy, or that they're funnier if loud patterned shirts are involved? (Okay, I'm always a sucker for "madre grud.") The final twist--Lenny erasing Little Caesar's memory--is more or less set up from the beginning of the first story, except that it's only mentioned in passing that Caesar's susceptible to that. 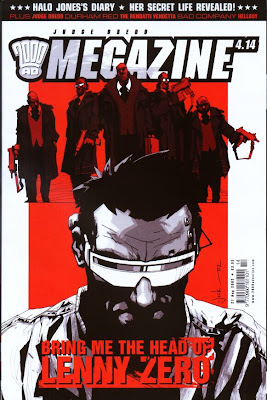 And the fact that the Judge who comes to arrest Lenny is Dredd (rather than somebody from SJS, which would make much more sense in the context of this story) is a recurring problem with Dreddverse stories: that guy is everywhere, to the point that if we're introduced to a Judge who isn't him, it's a pretty safe bet that he or she is about to be shoved under a bus.

Then we get to the Slick Dickens sequence: three brief John Wagner-written stories, initially published in three different decades. (Honestly, about once every ten years is just about right for this particular character: he's good for one joke, and that's it, but the joke improves by going back to it once enough time has passed for everyone to forget it. Which is why compiling these stories might not be in their best interests.) The second one, 1993's "Dressed to Kill," is the reason I'm covering Lenny Zero this week, incidentally--after that, this volume jumps to the year 2000.

In theory, I dislike the vaguely gay-baiting tone of the smirky "boys at the gym" innuendo. But it sort of redeems that idea that maybe Truman Kaput doesn't realize that that's what he's doing (and naming Slick's absent partner "Leslie" is a nice touch). Not to mention that Truman apparently has unusual ideas about what "cross-dressing" involves--this page cracks me up every time I see it: 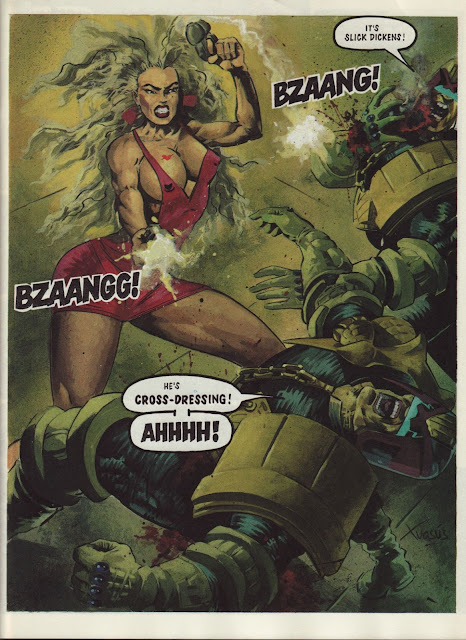 Wagner's writing is also pleasantly smart-assed, especially in the later stories. You can tell he's relishing the opportunity to write Dredd dialogue that sounds completely off ("No! I have to go! And I have to go alone--or I'll never be able to hold up my head as a Judge again!"). I'm not sure what the "Harvey Pica" shirt in "Slick on the Job" is about, but I bet it's a Harvey Pekar allusion of some kind. Also, God, Greg Staples is good: of all the Dredd artists who combine that sort of post-Bisley modeled painting with comedy, he's the one who understates the jokes most, but he delivers them.

Gordon Rennie and Simon Coleby's three Bato Loco stories are kind of a wash for me, unfortunately. I get the principle of what Rennie's trying to do--a variation on the Damon Runyon narratorial voice that Wagner attempted years earlier in "Little Spuggy's Christmas"--and it's a promising idea at its core. But the earring and goatee and constant exclamations of "Madon'!" and gold-digger girlfriend and so on leave a bad taste in my mouth, and Coleby rarely finds the balance between superdistorted wackiness and legibility. 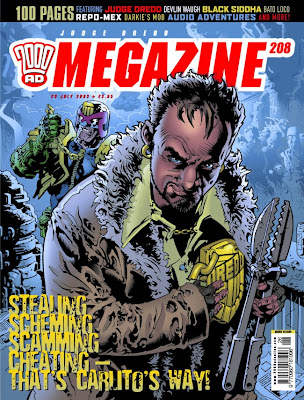 As for the two Robbie Morrison-written stories that round out the book, they're decently constructed, but also the kind of between-the-Wagners filler that turns up a lot in latter-day Dredd: "Street Fighting Man" is a "criminal tries to go straight but falls foul of old gang obligations" formula whose form is barely modified by draping a thin veneer of Mega-City One over it, and "Wallcrawlers" is a thin little idea that probably would have worked just fine as one of the old Daily Star weekly strips. For that matter, constructing a story around a character spraypainting anti-Dredd graffiti can't help but call Chopper to mind--maybe not a reference point it's wise to invoke.

Next week: the complete Mechanismo collection, in which Dredd fights a great big robot for many, many episodes.
Posted by Douglas Wolk at 11:00 PM