Before we get started this week, I need to tip my hat to the wonderful Sarah Glidden, of How to Understand Israel in 60 Days or Less fame, who painted this Dredd commission for me! If you happen to be in Germany this week, she's doing commissions of both super-types and actual people... 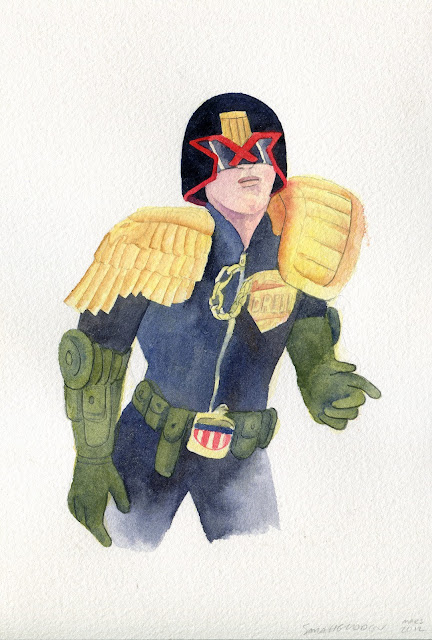 OK--now down to our featured book this week, Missionary Man: Bad Moon Rising, and our conversational guest: please welcome Mr. Evan Narcisse! I had the pleasure of working with Evan at Techland; these days, he’s blogging over at Kotaku, and also Twittering up a storm.

DOUGLAS: Evan, I think your initial reaction to this material was “These stories are weird. It’s Quitely, but also not.” True enough. When Missionary Man first appeared in 1993, it was Frank Quitely’s first comics work beyond the Glasgow underground comic book Electric Soup. (I’ve heard rumors that a couple of other artists in Electric Soup were also pseudonyms for Vin Deighan, but “Frank Quitely” was the one whose style caught on.)

Quitely only got to draw the first two episodes of Missionary Man before he did the first Shimura story with Robbie Morrison a few months later (then returned to Missionary Man for “Bad Moon Rising” in 1994); one more Hondo City Law one-shot, and that was it for his 2000-related career, aside from a lovely cover for the Megazine in 2010. By 1996, he’d formed his enduring partnership with Grant Morrison for the about-to-be-reprinted-at-last Flex Mentallo miniseries, and he’s been drawing American comics ever since.

Missionary Man was also very early work for Gordon Rennie—he’d previously published a couple of one-off stories and the miniseries White Trash, with Martin Emond. (The latter is a particular favorite of one of the guys who runs my local comics store.) Rennie went on to write pretty extensively for 2000 AD and the Megazine, both in Dredd’s world (“Cursed Earth Koburn,” “Mean Machine”) and outside it (“Caballistics Inc.,” the current serial “Absalom,” and many others). And, for the past decade, he’s been one of the go-to guys for Dredd-when-John-Wagner-can’t-write-it; 2005’s “Blood Trails” and its sequels “Matters of Life and Death” and “Burned Out” got to do more with Dredd’s supporting cast than almost any other non-Wagner story in the current century. (He also posted last week that he thinks Missionary Man's time has passed.) 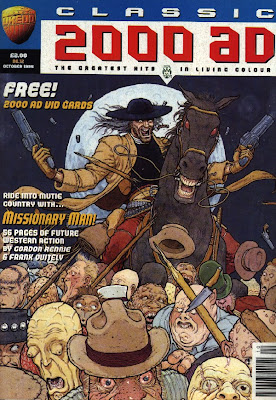 The Missionary Man feature itself was remarkably long-lived for a premise that was so slight and so strongly associated with an artist who’d only drawn it for a few months; beyond the material collected here, it ran another 57 episodes between 1994 and 2002. But yeah, it is really slight, a very straightforward bunch of Western clichés (by way of earlier Westerns in the same Dredd-universe setting, like “The Cursed Earth” and Helltrekkers and The Dead Man) and things-a-hellfire-preacher-would-say clichés, with monsters thrown in to keep it visually interesting. There’s a germ of a clever idea in there—the sci-fi Western with the “sheriff”’s civil authority, as in Dredd, replaced by religious authority—but that doesn’t really go anywhere. Dredd alumni Garth Ennis and Steve Dillon’s Preacher, which started only a few years later, is a much more interesting take on the same basic elements. The end of “Bad Moon Rising” has the one really good Christian joke in this book—Legion, about to be thrown into the pit of fire, yelling “I can see my house from up here!”

So that leaves Quitely’s artwork as the particularly interesting thing about this. For me, it definitely looks like the Quitely we know, right from the outset: micro-detailed, texture- and topography-minded drawing on faces and figures, coupled with compositions that are so strong and use negative space so well that they let Quitely get away with drawing practically nothing in the way of backgrounds; action shots that look like something frozen in place for a microsecond instead of suggesting movement (the explosion on the last page of the first episode seems sculpted rather than kaboomed); very carefully considered choreography (the tier with Cain being dragged behind the horse in “A Town Called Intolerance” is almost a straightforward zoom-in, but not quite). It’s not quite as bogglingly masterful as the Quitely of We3 or All-Star Superman or even Flex Mentallo, but for a mainstream debut, it’s striking and impressive. It has character; it doesn’t look like anybody else’s work.

The other artists who drew the series in this period aren’t quite as exciting, in part because Rennie doesn’t give them a lot to work with. I like Garry Marshall’s color sense a lot, but “Legend of the Unholy Drinker” is basically just a talking-heads story with a monster in it—Marshall’s sunset palette is the most exciting thing about it. “Sanctuary,” besides being a big pile of unaltered Western and horror tropes, has artwork (by Sean Longcroft) that looks like it was aiming for a comedy strip or a Richard Sala book and got lost. And “The Undertaker Cometh” was yet another professional debut, this one Simon Davis’s: he went on to draw a handful of other Missionary Man strips, and is still drawing for 2000 AD now, but in this one he looks like he’s trying to impress somebody with how many tiny little dots he can squeeze into each image.

I’m curious, Evan: what did you make of this stuff, as someone who’s coming into the setting more or less cold but has been following Quitely’s work for a long time? 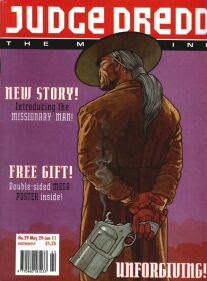 EVAN: This book also reminds me of Garth Ennis and Steve Dillon’s Preacher, a twisted Americana opus created by two Brits. The Missionary Man could be a conceptual grandfather for Preacher’s Saint of Killers, with his white hair, brown duster and proclivity for God-sanctioned ultraviolence. Ennis and Dillon are products of British comics publishing who wound up as American comics superstars, and the back-and-forth exchange of inspirations reminds me of my first encounters with Judge Dredd.

Judge Dredd—and the 2000 AD plane he comes from—hold a weird significance for me. I think I came at Mega-City’s top cop via annuals solicited in old Bud Plant mail oreder catalogs. The exact years and content escape me, but I remember Brian Bolland making that sneer come to life really clearly.

What I found in my first readings of Dredd comics was a sense of politics seeping into fiction, in a way that I rarely encountered in American superhero comics. The Earth of Dredd's sci-fi was one that would exist as the ultimate end of 1980s geopolitical jockeying. The Cold War would fuck us all, in other words. It’s how I was able to access the mood of Thatcher-era England, and now that I look back at it, that work on the ultimate authority figure was probably done by people who were punks in their day. Through the fractured lens of various creators, I learned about English slang, caste systems and attitudes by reading the 2000 A.D. reprints I encountered as a teenager.

I bring all this up because the Missionary Man comics read like the work of folks who absorbed Western genre tropes from outside the bounds of those ideas’ motherland. You’ve got a guy lynched at the beginning of “A Town Called Intolerance,” which nods at the institutionalized racism in the U.S. after the Civil War, and the religious fervor that runs through the whole strip references the itinerant preachers and revivalism that gripped America in the 19th century. The weight of Sergio Leone and spaghetti westerns is heavy here, but without the morally grey heroes of those movies. 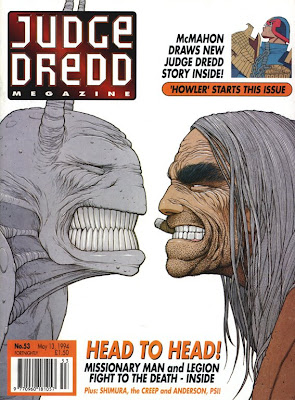 What’s interesting to me about Preacher Cain’s stories is that—even while they’re pretty straightforward—they represent the other side of the crypto-fascism seen in Dredd comics. Dredd’s an avatar of man-made law-and-order imperatives. When he bellows, “I am the Law,” you know where he gets his power from. Missionary Man’s orneriness comes from super-religious singlemindedness, but all those Bible quotes don’t make for very good catchphrases.

Rennie’s writing is, like you say, serviceable. He seems to have fun mashing up blood-and-bits sequences with Bible-thumping, but there’s not much depth beyond that. Quitely’s the real appeal for me here, and what you say about how he renders details in this early stage of his work rings true. But his body types look different: slimmer and not as bulked up as in his later work. The faces of the background characters look cartoonier, too, and feel like the work of a younger man.

When I’ve read Dredd, I could always tell myself that some kind of other real-world commentary was going on in those stories, simply by virtue of where they were set. "Missionary Man" doesn’t have that sense of intent built into it, and the material ultimately feels less memorable because of it.

Thank you, Evan! Next week, we return to the Titan-era Ennis collections for Muzak Killer, and maybe a discussion of Dredd’s relationship to pop music.
Posted by Douglas Wolk at 11:00 PM