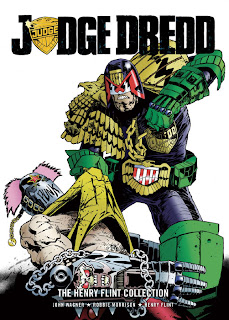 A short entry this week, for a book that probably deserves a longer look.

If I had to pick a latter-day Judge Dredd artist whose otherwise unreprinted work it would be a bright idea to collect in a showcase volume to reach potential readers who might recognize the artist's name from other work, it might not be Henry Flint. (Might be John Higgins, actually: between "Monkey on My Back" and "Served Cold," there'd be the backbone of a very solid book.) If I had to pick an underrecognized MVP of the past decade or two of Dredd, though, Flint would be right up there. I suspect that the only reasons he's not better known in American mainstream comics are that he's done most of his best work for 2000 AD, and that the American comics he has drawn have been very low-profile. The Omega Men? The Haunted Tank? Come on! 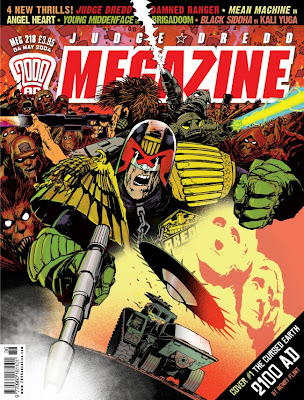 Flint is one of the relatively few regular Dredd artists who's adept at both serious and funny (and seriocomic) stories--a real asset, given the way John Wagner likes to switch back and forth between grimness and hilarity. I tend to think of Flint as working in more of a dramatic mode these days, but that's mostly because he's been drawing the bulk of "Day of Chaos," which is as dark a Dredd story as there's ever been. (Even that has its funny moments: Flint's drawing of Ribena Hardly-Lucidberry in her grape costume in the first chapter of "Eve of Destruction" still makes me giggle every time.) It's a bit of a surprise, though, that the first two-thirds of The Henry Flint Collection are all more or less straightforward comedies: only "Street Fighting Man," which we covered a while back, doesn't have punch lines everywhere.

Stories that combine both modes, actually, are Flint's specialty (see also Zombo). "The Gingerbread Man" is the strongest-looking story here, really gruesome and really funny, with lots of textural gestures that Flint didn't try much early on. (The image of P.J. and Inga in their airship is closer to Frank Miller's Moebius/Kojima hybrid in Ronin than anything else I've seen.) Flint isn't a showy artist, or one who generally produces eye candy (although a lot of his covers in the past few years have been really attention-grabbing); he's a stylist of a kind who'd rather make a character look ugly in a striking way than attractive, and he'd rather move a story along than pause the reader's eye for an image that's particularly beautiful or striking. He's particularly good, though, at squeezing a lot of content into a single page: there's a page of "The Gingerbread Man" that has eleven (word-heavy) panels on it, and it doesn't seem especially cramped. 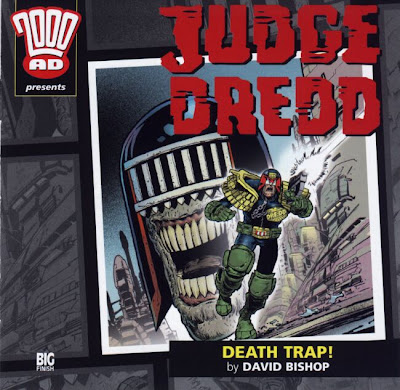 There's one department in which Flint has been drastically underused, though, and that's covers showing Dredd himself--especially for issues in which he's drawn stories. (In fact, he drew the covers of none of the issues reprinted in this volume.) If BARNEY is to be believed, he's drawn only three Dredd covers for 2000 AD, including the not-so-great piece that serves as the cover for The Henry Flint Collection. He did, however, draw Dredd covers for a bunch of the early-2000s 2000 AD audio dramas--one of them appears above--and a few issues of the Megazine, including the dead-on Ezquerra homage seen a few paragraphs higher.

The peculiar thing about this volume is that it probably relies on absent context more than any other Dredd collection. The prime example of that phenomenon is "J.D. Megson," a story that I bet makes no sense at all unless you understand that it's a very thinly encoded story about the decline and unlikely survival of Judge Dredd Megazine. (It ran in Megazine #3.63, whose Greg Staples cover appears below. At that point, the Meg was in rocky waters, with one new Dredd story each issue supplemented by reprints of Preacher and whatever else happened to be around; the next issue was the first of the redesigned incarnation that featured more new material.) Something about "J.D. Megson" makes me wonder if it was originally written to run in a final issue--especially the outright admission that the Meg used to be a lot better: "Money was no object back then... Bennett Beeny himself appeared here." I assume there are a lot of other editorial in-jokes I don't even get--the character names (Skuff, Jube, Pettyman) might well signify something... 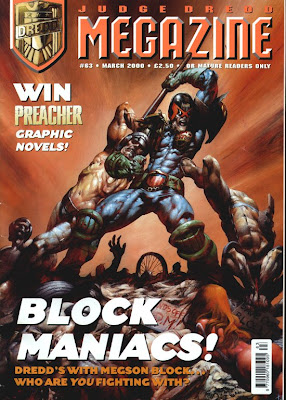 Also in the absent context dept.: a handful of these stories really seem to belong in other volumes. "The Gingerbread Man" isn't a standalone story at all: it's a bridge between The Complete P.J. Maybe and the "Talented Mayor Ambrose" sequence in Tour of Duty. The payoff of "Flood's Thirteen"--which I think may be the longest single-episode Dredd story that's not one of the DC team-ups--is set up by the earlier installments of the Hottie House/Branch Moronians sequence. And the two stories involving Mrs. Gunderson that open the book are thoroughly baffling without the setup of her earlier appearances and her connection to Judge Death. (For the benefit of American readers: the title of the second, "Turned Out Quite Nice Again," is a reference to British singer/comedian George Formby's catchphrase.)

Next week: this blog celebrates a year of weekly posts (!), and we leap backwards in chronology for a book that won't actually come out until Tuesday--the thematically organized American collection When Judges Go Bad.
Posted by Douglas Wolk at 11:00 PM