The first Mega-City Masters collection was one of the inaugural volumes of the Simon & Schuster-published 2000 AD line, presented as a potential starting point for Judge Dredd for American readers. One approach to an introduction, obviously, would have been to start at the beginning (and, as I recall, the U.S. edition of Complete Case Files 1 came out around the same time). But Dredd isn't one of those projects like Y: The Last Man or The Walking Dead where everything's lined up and ready to go on page one. It takes a while to get up to speed, and the curve is even steeper for someone unused to the particular rhythms of British comics from the '70s.

Another way of introducing a long-running series to a new audience is to showcase a particular star creator, which is effectively what the DC reprint line a few years earlier tried to do with Dredd Vs. Death (which collected a bunch of Brian Bolland-drawn episodes) and Judgement Day (as far as Americans were concerned, Garth Ennis was the next biggest marquee name who'd contributed a lot to the catalogue). The "let's ease 'em in with Bolland" technique, actually, has also been adopted by Eagle Comics (back in the early '80s) and by IDW's forthcoming collection. 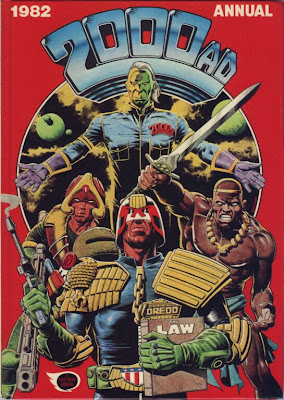 A third approach might have been to assemble some kind of greatest-hits collection, with some of the best-loved episodes; that worked decently for The Spirit a few years ago. (Prion Books even put together a volume called The Best of Judge Dredd some time back, although it's very strangely weighted: a ton of material from the first four years, then the first two P.J. Maybe stories, "America," a long leap forward for "Mrs. Gunderson's Little Adventure," and finally four episodes of "Origins.") The obvious difficulty with that idea is that a lot of the best Dredd stories are either really long or context-heavy or both. Even if you're not going to shoehorn all of "Necropolis" into an anthology, you can't just drop "Letter from a Democrat" or "Leaving Rowdy" or "Tea for Two" on a new reader and leave it at that.

And some of them are really nice-looking! You could do a lot worse than "The Alien Zoo" (the only full-color Bolland story) or "Suspect" or "Bat-Mugger" to get a sense of the visual side of Dredd. I don't know that I'd have picked "The Amazing Ant-Man" as a representative Carlos Ezquerra episode, but it's certainly from one of Ezquerra's most interesting periods. On the other hand, it's strange to see both "Joe Dredd's Blues" and "A Mega-City Primer" (a.k.a. "Heavy Metal Hero") reprinted in the same volume, considering that not only do they have the same premise, but parts of them have exactly the same script. (As I suggested back when I covered Heavy Metal Dredd, the latter strip was indeed re-reprinted in a supplement included with 2000 AD #1068, with--as it turns out--only the captions on its first two pages rewritten as a mock-primer before it shifts back to the song format. Weird.) 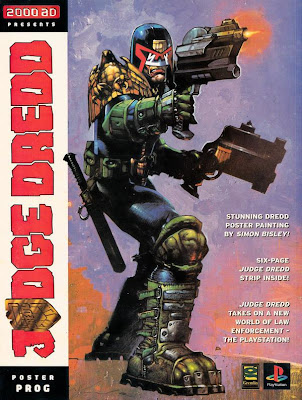 As for the episodes we haven't covered before (we're up to Prog 1012 now, believe it or not): John Wagner and Trevor Hairsine's "The Rise & Fall of Chair Man Dilbert" is a cute satire of the mid-'90s art scene, and the scene with Bishop Desmond Snodgrass at the beginning is a nice little follow-up to his "outing" in Prog 964's "Dead Simple." (Dilbert Bowels would be higher on the list of ridiculous Wagner character names if he hadn't already given us a Dilbert DiMaggio in Prog 949.) The single-episode gag strips here (and the single-episode tragedy "The Runner") don't do a lot for me; Jock's art on the one-joke "Crossing Ken Dodd" is the work of a very good artist who hasn't quite found his voice yet, and I suspect that the American reader who'd know who Ken Dodd was without looking him up would be rare indeed.

The treats in this volume for my purposes, though, are its final two stories. "Mutieblock" is a terrific example of recent-vintage Wagner doing what he does best. He doesn't overdo it with the "documentary" storytelling device, but that allows him to get a lot of characters' perspective on the events of the story (and Kevin Walker handles it exceptionally well, too; it's dense with characters and explosions, and Walker gives them all lots of breathing room). Dredd never actually talks to the "camera," even when it's pointed at him--as this year's Free Comic Book Day story makes clear, he doesn't have a lot of time for that stuff--but a lot of the narration is clearly from his POV, although it can shift to, for instance, the mob members' POV just as easily. And then there are the other splendid Wagnerian touches: character names ("Impatience Johnson" indeed), the immigration clerk who has no idea what a bigot he is, "I've never had kneepads before," a pair of Elton John jokes for no particular reason, Endell Wenn's comeuppance (and of course he would be from Wat(t) Tyler block), the inevitable "on my way" in the final panel... 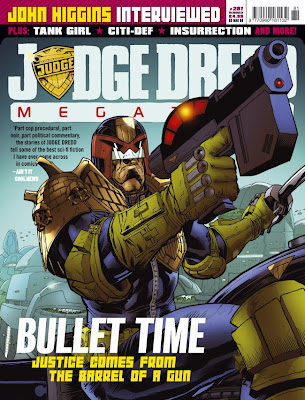 I really like Al Ewing and Colin Wilson's ludicrously violent "Magic Bullets," too, and I'm psyched that Ewing's apparently going to be writing a batch of Dredd stories post-"Day of Chaos." The main plot is a variation on the familiar "rich guys kill for thrills" story ("The Hunters Club," etc.), but the subplots and callbacks ("la placa!") feel like they're getting a boost from the strip's history without just hauling out favorites again. It's really funny, too, and the best joke--Dredd failing to offer Bennett the consolation of the same thing having happened to him once upon a time--strengthens the real core of the story, the relationship between the two of them: Dredd's not testing his rookie any more, he's giving his protégé a hand, praising him for his good calls and nudging him when he needs it.

Next week, we head back into the Cursed Earth for The Hunting Party.
Posted by Douglas Wolk at 11:00 PM