It might be fitting that I have constantly fluctuating feelings about Insurrection. It's a beautiful-looking project--Colin MacNeil seems to have worked up yet another new style for it, this time a black-and-white technique that touches on both the painted look of late-'70s/early-'80s high-end comics SF (I'm thinking, in particular, of Jim Starlin's The Price) and charcoal, with a bit of fancy 3-D texture modeling too. It's also one of my favorites of Dan Abnett's comics that I've read; I've enjoyed the Nova/Annihilation material, but I've never quite gotten into Sinister Dexter, and Warhammer is completely alien territory to me. And it's got a very smart premise (colonial marshal rebels against the imperial power that sent him as a matter of principle, but in outer space, and with Judges), and in places an even smarter execution. There are just some things about it that almost work. 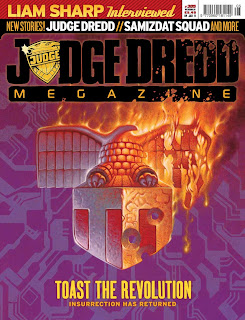 In places, it seems like the Dredd-universe aspects of Insurrection are mostly window dressing; I think I've seen at least one or two people online suggesting it could be a retooled Warhammer 40,000 idea (although Abnett says it's not). Occasionally, it's hard to reconcile with the continuity we know. I can very easily see the Hershey administration accepting the fruits of K-Alpha 61's struggle without sending any support to it; it's harder, though, to imagine that Mega-City One has the resources that would be involved in giving the SJS alone a whole fleet of starships.

There are ludicrous plot points and contrivances ("we can make all the chips at the other end of the galaxy malfunction by remote control, which will cripple Earth, even after the Second Robot War made people really cautious about that stuff..."); there are ingenious bits of dialogue and invention (like the SJS prison ship being "Elizabeth Fry"). Karel Luther's name is resonant, too: one name from an author who was one of the first to use the word "robot" and wrote about post-human sentients, the other from a reformer who broke with his instructors' dogma. The third chapter of "Insurrection II," in which Freely explains the mechanics of the conflict to Luther (here are the machines they're using, here are the tactics we're using in return) is almost a case of telling rather than showing--but it also lets MacNeil unleash his design chops for page after page, which is "showing" if anything is. (The "catts"! The "spyders"! The Uglydoll-ish "botsmiths"!) 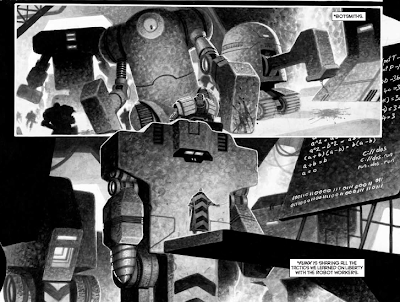 Droids as born-again religious types is a legitimately amusing idea; having them refer to "God" and "Jesus Christ," rather than "Grud" and "Jovis," opens up a whole other can. (Which reminds me: I recently noticed that Prog 1 not only contains several uses of "My God!," but a "Drokk it!"--spoken by none other than Dan Dare!) One of the small details that I enjoy in latter-day Dredd, though, is the implication--without explanation--that at some point between now and 2099 something happened that made the new names the ones everyone uses, that "god" is now only the generic form (as in "the God-City"), and that the few people who use the old names are being deliberately archaic about it.

Abnett's proposal, reproduced at the back of the book, is fascinating reading (I especially like the detail that the alternate title was "Rebellion")--although he notes both that he doesn't intend the story to be "one-sided in terms of reader sympathy" and that "the reader should be rooting for the rebels and hissing the Judges." In practice, it's closer to the latter: Abnett stacks the deck by making Luther's opposite numbers in the SJS cruel bastards--Senior Judges Kulotte is all but a moustache-twirler, and Laud isn't far behind him. (Nice design on the mute psychic Siren, though.) For that matter, having Luther genuinely believe that robots have rights of full personhood and citizenship makes his political position more extreme in the other direction than, I would guess, just about any of the story's readers. (And if it's morally defensible for Luther to destroy "automated systems" but not "droids," it might have been useful to explain the difference.) 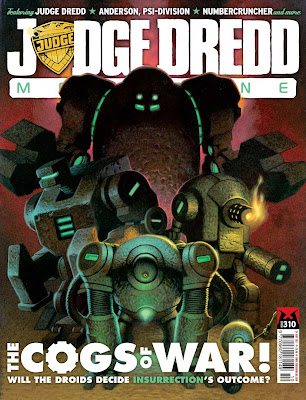 But that ending, that ending--that's what really won me over on this volume. Apparently there's going to be a third Insurrection series this year, inevitably set on a battlefield called "Equality" (are some more equal than others?). I'll be happy to read it, but I also cherish the idea of Insurrection ending where it does in this collection, at the end of its second serial, with Luther finally understanding the hard limit of his rebellion's viability; having made one "tough decision" after another that's actually easy enough to square up with his ideology, he's come to a moment where his decision is not between folding and continuing the struggle (and maybe going out in a blaze of glory), but between betraying and destroying two different legitimate claimants on his ultimate allegiance, and he doesn't know what to do. If this is a story happening in the Judges' universe, we know how it ends--we have to, since there hasn't been a worldwide equipment failure--but, considered on its own, that is a beautiful ending to this particular story.

Next week: one more last-minute addition to our running order: the brand-new third volume of Judge Anderson: The Psi Files, collecting most of Cass's late-'90s appearances.
Posted by Douglas Wolk at 11:00 PM