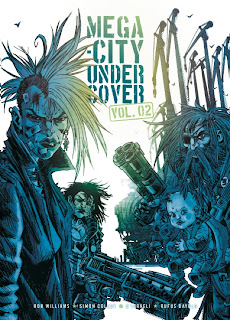 This is the sequence in which Low Life really took off--where the series went from being a fun Dredd spinoff to taking on a life of its own. That had a lot to do with two big shifts during this period. One is that the remarkable D'Israeli took over drawing, for the two longer serials in here--"Creation" and "Hostile Takeover." Rob Williams' checklist of things he keeps in mind while writing comics includes "What are the cool set pieces?" and "How visual is this? And whatever the visuals are, how can we make them bigger?" He keeps handing D'Israeli big, cool set pieces, and D'Israeli keeps making them bigger and cooler. 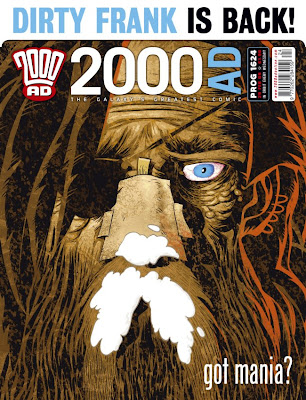 I've sung D'Israeli's praises here before, but I can't get over how good his Low Life stuff has been, right from the outset--he thinks a lot about how to show everything, in terms of both design and pacing, and it pays off. See, for instance, this blog post, which touches on how the no-solid-blacks technique he uses for the flashback sequences in "Creation" is a deliberate echo of Carlos Ezquerra's style in the flashbacks of "The Apocalypse War."

Or how about this--there's that page early on in "Creation" (below) where we see the Low Life in a rainstorm. It's a six-panel page, with two scenes going on (including the first look at the Big Man). But look how he stages it: a gorgeous full-page establishing shot with grayscale used to indicate depth of field; one inset panel marked off with a border; another just set atop it, at the end, with its relatively huge masses of pure black and pure white making it look different enough from the background that a border isn't necessary (and making it a greater shock that we're seeing the Big Man, not to mention establishing that the Satanic under-lighting on his face is coming from the lights of the city below); the big, slashing, white raindrops the same size almost all over the page (except for the even bigger ones next to the extreme close-up on Jenkins' head), acting as a unifying element as we switch scenes; the Big Man visible when you go back and look at the inset panel, which he hadn't been on an initial reading... 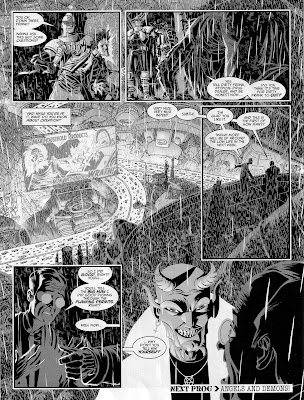 The other notable change with the material in this volume is that Williams doubled down on the idea that the series is called Low Life--not Judge Nixon, not The Wally Squad, not even Dirty Frank. It's about a corrosive place, and the damaged people who keep it alive. (That said, I wish we had a little more of a sense of the Low Life as a place, rather than as a set of backgrounds and rackets.) Nixon, who'd been the "anti-Batman" (as Deb Chachra put it) in most of the earlier stories, recedes after "War Without Bloodshed"; most of the regular cast is in a very different state after "Hostile Takeover"; and Frank, who'd been mostly the comedy relief character early on, moves into the spotlight, and turns out to be a good sight deeper than he'd appeared at first.

Frank becomes a much more interesting protagonist as his story is revealed to be more tragic than it once seemed. (He reminds me a little of E.C. Segar's version of Popeye: funny in a way that's also forthright about his terrible scars.) His voice clicks into position here, along with the running gag that despite his constant blabbing of the truth (and occasional fourth-wall-denting), nobody ever catches on that he's an undercover Judge. "Creation" is really the first time we get to take him seriously, because it's the first time we understand what motivates him: his absolute, crystalline devotion to the law is the only thing holding this mess of a person together. (The brilliant payoff to "The Deal" is what presents that idea most clearly, but it's also present here courtesy of the snowflake motif in "Creation" and the final sequences of "Hostile Takeover." See also his "justice" one-liner in "Trifecta"...)

"Creation" is a very, very ambitious story, not least because it tries to double as Dirty Frank's origin story (another meaning to the title)--and the missing pieces of that don't start getting filled in until "Saudade." It has the shared-universe problem of introducing technology so powerful that it's hard to see how subsequent stories can get by without mentioning it (nanotech that can make religious visions real?), and the not-enough-pages problem that the "religious visions" we see are all straight-up Judeo-Christian stuff. Even so, it's funny, and full of exciting little incidents, and hints at a bigger landscape; I can't blame it for aiming high. 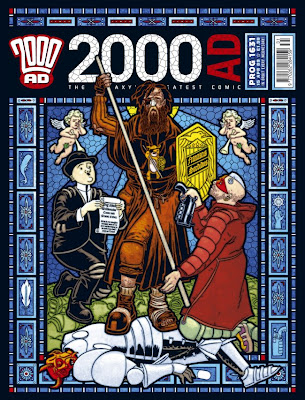 "Jive Turkey"--that's the one I don't know about. (I also don't get the joke of Mortal naming members of the E Street Band every time Cameron pukes, but maybe I'm overlooking something.) I get that Williams and Smudge are trying to compress the "Low Life as absurdist comedy" and "Low Life as Aimee Nixon's tragedy" strains of the series into one eight-page story, but it just comes out as dissonant, and pitting Frank against another over-the-top lunatic means that they're jostling to control the same parts of the scene they share.

The one other curious flaw in Williams' scripts here is that, in trying to not pound in the  concluding points of his stories, he can understate them to the point of obscuring them. The ending of "War Without Bloodshed," for instance: Aimee speaks Russian to the dying Bernie twice? And he says "I know you... you won't tell": why wouldn't she, now that he's dead? Is the implication meant to be that she's a covert Sov agent too? Likewise with "Hostile Takeover": the first chapter offers one implication about the Big Man's identity, the last contradicts that implication outright and offers another one, without coming out and stating it. 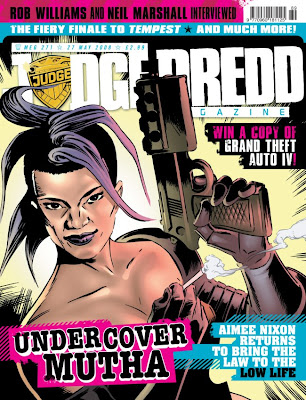 When Williams is on, though, he's totally on. (The callback to the I-can't-believe-they-got-away-with-that-design "Heavy Metal Kid" robot from the earliest era of Judge Dredd is sharp on its own, but making it "Cross-Dressing Trev"--with the implication that it actually hates its own design--is terrific because it gilds the lily.) Once again, every episode manages to have some kind of setup-development-climax dramatic arc of its own, including at least one big visual set-piece and a concluding cliffhanger, in five pages. This is also a series that gets better with every new serial: I like "The Deal" even better than "Hostile Takeover," and "Saudade" even better than either. I still don't think I'd want to read about Dirty Frank's adventures every week, but I hope I get to check in with Low Life for a few months a year for a while to come.

Next week: out into deep space for the collection of the first two Insurrection serials.
Posted by Douglas Wolk at 11:00 PM