Two years after the end of "The Apocalypse War," its spectre was still looming over Judge Dredd, but Alan Grant and John Wagner had pretty much run out of "post-war" plot kernels. (The anniversary parade at the beginning of "Question of Judgement" is a good gag, with a mushroom cloud and a pile of bodies staged as floats, but that's about it this time.) It's clear that the mega-epics were very popular, but that they were also exhausting to pull off.

And it must have been a mighty task to come up with a new angle for an epic: since the premise of the series is the relationship between the protagonist and the city, there are only so many ways to get a long story out of upending that relationship. Pat Mills had already done the "Dredd goes out of the city into a very un-city-like environment" plot (and Wagner and Grant revisited the Cursed Earth for "Helltrekkers," a 29-part serial that ran from Prog 387 to Prog 415, and has been reprinted a couple of times but never as a book, but let me tell you, you're not missing anything). Wagner had done the "Dredd moves to a different city" plot and the "Dredd leads the rebellion against the new leadership of the city" plot. They'd done the "Dredd leaves the city and the planet and goes on an outer-space quest" plot. Then they'd done the "city becomes a war-zone, thereby changing all the rules" plot. 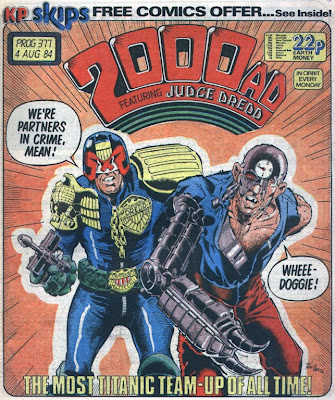 So for the first third of this volume, you can see Grant and Wagner casting about for ways to make the feature stay fresh. "Dredd Angel" is the best thing in the volume--it's very funny most of the time (the gag about "the lost treasures of Liberace" is an excellent conceit, if one likely to be lost on British 14-year-olds in 1984), and Ron Smith plays a couple of scenes for comedy that other artists would have treated as straighter violent chaos. Look at the way he draws Dredd running after Mean Machine here--that's practically a Bugs Bunny pose. 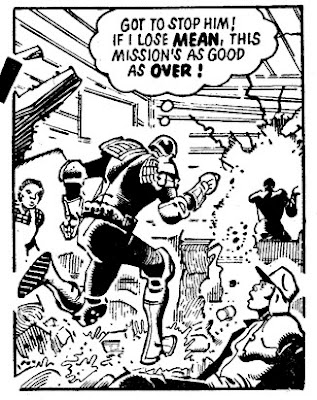 It's fair to say, though, that "Dredd Angel" is a rewrite of "The Cursed Earth" with a little bit of "Destiny's Angels" spliced into it: once again, Dredd has to go (via land, for a similarly opaque reason) across the badlands to deal with a McGuffin, with an unreliable/violent guide. Still, it opened up the "clone bloodline" plot that would bear fruit a few years down the line.

It also looks particularly elegant by comparison with "Gator," which follows it. Turns out I'm not the only one who's not crazy about Kim Raymond's artwork: both writers were particularly unhappy with it. (Grant: "We tried and tried to stop Kim Raymond ever doing Dredd again... Some really poor artists have done Dredd and Kim Raymond did the worst Dredds of all." Wagner: "Why, for instance,  give Dredd to an artist like Kim Raymond, who was so obviously unsuited?") 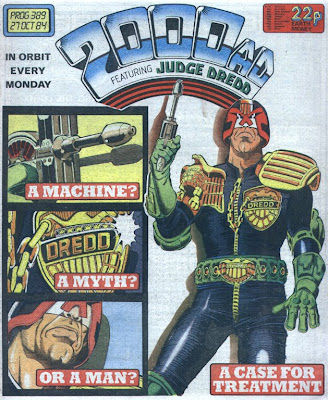 The "Question of Judgement"/"Error of Judgement"/"A Case for Treatment" sequence was another potentially interesting avenue--Dredd questioning his own actions and dealing with the long-term effects of being a state killer--that Wagner and Grant went about in a way that quickly turned into a dead end, and immediately abandoned. (It's very strange to see Dredd being suddenly self-reflective and soft-hearted; it doesn't open him up as a character so much as go directly against what we know about him.) "A Case for Treatment" also seems to have been written as a lead-in for "City of the Damned" before "The Wally Squad" was abruptly slotted into place--there's an amusingly awkward bit of dialogue at the end, where McGruder says she's about to give Dredd "his sternest test since the Apocalypse War"... except for this other thing he has to do first. 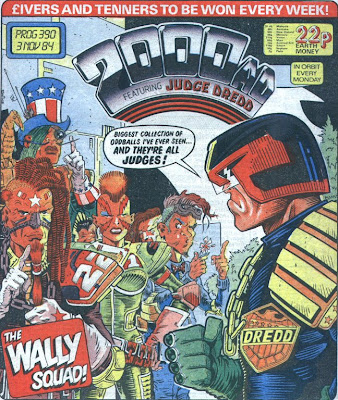 "City of the Damned" was an awkward proposition from the beginning (four artists in 14 episodes!); according to Thrill-Power Overload, it was originally supposed to be another half-year-long epic, but at some point Grant and Wagner decided that it wasn't working and wrapped it up pronto. It does manage to come up with another variation on the relationship between Dredd and the city--the time-travel plot means that he could be in the same place but find it in ruins (and overrun by the vampiric Judges, a.k.a. the "Hell Street Blues," a joke I'm guessing has largely been lost to time). And teaming Dredd up with Anderson again (and making him relatively helpless and reliant on her) was a welcome touch. 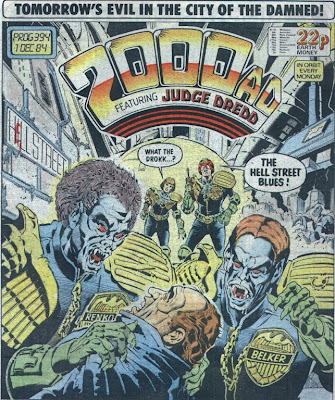 The problem was that Wagner and Grant were clearly not particularly into the story--separating Dredd from most of his supporting cast meant that it was just one fight scene after another. That final episode is pretty action-packed (although Ron Smith still seems not to be too certain of how to draw McGruder--compare her appearance here to "A Case for Treatment"), but there's a palpable sense of "well, that's over with!" at the end of it.

(A historical note: Prog 403, right near the end of "City of the Damned," had the first time Bolland Dredd cover in 2000 AD proper in a while, although it was actually just his cover artwork for "Mutants in Mega-City One," a one-off single by the Fink Brothers, a.k.a. a couple of moonlighting members of Madness.) 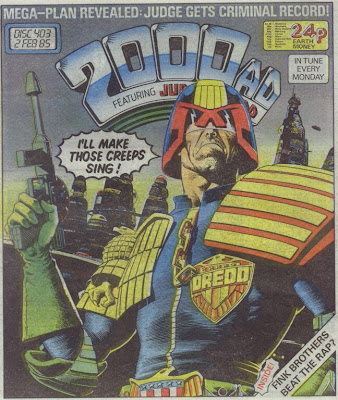 The final third of Case Files 08 is the weakest Judge Dredd had been in years, partly because of artistic inconsistency (the five-parter "The Hunters Club" involves three very solid artists with not-terribly-compatible styles), but mostly because Grant and Wagner were phoning it in. "Juve's Eyes" is something of a low point, thanks to its "comedy" Spanish accents (and a very thinly disguised slur)--Judge Dredd is so far ahead of the curve in a lot of ways that it's particularly grating to run into retrograde crap like that. (See also: bits of the first Hondo City story.) Also, it's thankfully been a while since a vagrant in the strip was referred to as a "vag."

"99 Red," the final story in here, was also the final story reprinted in the Complete Judge Dredd magazine-format series of the early '90s. (That series was promptly replaced by Classic Judge Dredd, which went up to the end of "Oz," i.e. the end of Case Files vol. 11.) I can't even tell what's supposed to be happening at the end of the episode: the next-to-last caption ("Sleever may never recover. But with luck--and careful laser surgery--Sleever could be back on the streets within days") makes no sense. Besides, wouldn't Sleever just be shipped off to Titan? 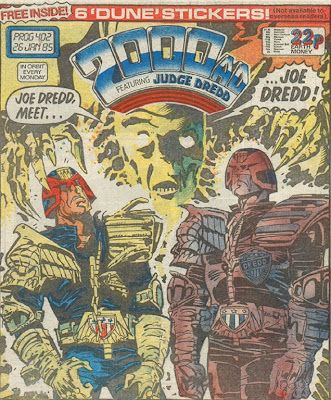 Still, there are a few jewels among the lumps of coal. "Thirteenth Assessment" is a cute take on the "Dredd and the rookie" formula, and Judge Brisco actually turned up again in 2000 AD just a few weeks ago. (I guess his mom got out of jail sometime around the end of "The Satanist.") "Sunday Night Fever" (which features Arthur Koestler Block leapers again!) finds Cam Kennedy trying to work some of his Mike McMahon-isms out of his system, but it's a nice-looking piece as it is. In the prog after this volume ends, Kennedy would draw the first episode of the next great Dredd story. But that will have to wait until the 18th: next week, we take another detour into color, as we arrive at the second volume of The Restricted Files.
Posted by Douglas Wolk at 11:00 PM