An elephant in the room: some enterprising person or group of fans decided, at some point, that they could do the Complete Case Files books better. There are digital bootleg versions of the early Case Files floating around online; the difference is that the bootlegs have color where the original pages were printed in color (the first two pages of most episodes before mid-1988), and they insert all the Dredd-related-but-not-Judge Dredd-proper stories at the appropriate point in the narrative.

For a lot of the earlier volumes, that's a minor improvement. (For some, it's an actively bad idea--at least one bootleg I've seen gets a lot of its color pages from badly chopped-up and reformatted American reprints.) But in 1987, 2000 AD's production values were ramped up a bit, and as of a few episodes before Case Files 11 begins, the opening spread of the Judge Dredd feature was suddenly in painted color. The half-tone versions of the color pages in the printed Case Files 11 is decent--although it still gets muddy in a few places, like the beginning of "Return of Death Fist"--but it's distinctly not the way these stories were intended to look. And the bootleg files also include other Dredd-related pages from the original publications, the most interesting of which this time is this one, which was printed in the issue before "Oz" started: 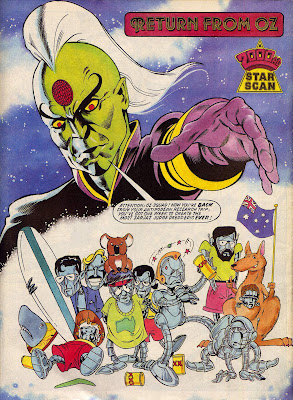 There are a lot of in-jokes going on here, most of which I don't get and bet I'm not supposed to get, but the implication is that seven members of the 2000 AD staff had gone to Australia to research "Oz." (Was that the case?) The bent-over droid at far right is "Burt," a.k.a. Richard Burton; I'm guessing that the droid in the green sweatshirt and visor is John Wagner, and the one with the glasses and purple shorts is Alan Grant, but if anyone can correct me and/or fill in other information, I'd be grateful.

In any event, it seems as if Dredd stories had been stockpiled in advance of "Oz," which was the first "epic"-length Dredd story that had been attempted since "City of the Damned" a few years earlier. The 22 episodes (11 storylines) that precede it in this volume are drawn by ten different artists--only Liam McCormack-Sharp gets two stories, and they appear consecutively. And Tharg's stern note that the droids have one week to get "Oz" in order hints at how hurriedly it must have been put together: when the first three episodes of a 26-part story are all drawn by different artists (and nine different artists in all contribute), there's clearly some frantic catching up going on. Jim Baikie seems to have been the speed demon of the lot--not only did he draw the final two episodes, he drew the three that followed them (in the next volume). 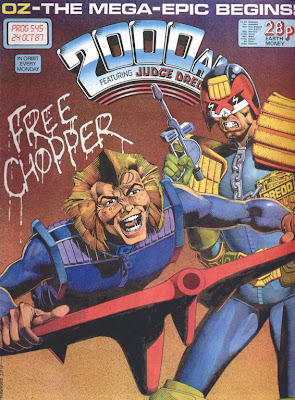 "Oz" is a new kind of Dredd epic, in the sense that Dredd is almost tangential to it. Remember that theory I had a few weeks ago about how the long serials usually address some aspect of the relationship between Dredd and the city? This one deals with either of them only during the Judda sequences; it's basically a Chopper story. (Dredd is entirely absent for long stretches of it, which was awfully unusual; so's the thematic two-page splash that opens the first episode.) Seeing all the parts of "Oz" together, actually, I can't help but wonder if the Judda plot was originally intended as a different story that would follow the Chopper/Supersurf sequence, and then got spliced into "Oz" when deadlines were getting tight. The Judda business turns up out of nowhere in the seventh episode (and when Chopper returns two weeks later, he picks up right where the sixth episode left off); the Judda and Chopper only appear in the same installment a few times, and the two plots' resolutions have almost nothing to do with each other.

Also, the Judda sequences are something of a distraction: Chopper's story is so compelling that mysterious violent weirdos shouting slogans, interspersed with chunks of exposition, get tiresome quickly. On the other hand, Brendan McCarthy's artwork here is a much better fit than it had been in Case Files 10--you can see him trying to give the series a consistent look. Unfortunately, it's a look that all the other artists ignore; when Will Simpson takes over for the conclusion of the Judda business, the visual energy goes way down all of a sudden. 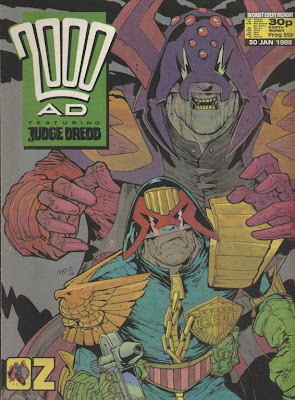 It's interesting to imagine what "Oz," or in fact this era of Dredd, could have been like with a more consistent visual approach. There are very few artists who can handle a 6-to-8-page weekly strip, but it's just possible that Brendan and Jim McCarthy and Brett Ewins might have been able to tackle it together, at least for a while. (The latter two were mostly off drawing "Bad Company" during this era, though.)

I reread "Oz" after not having seen it in a long time, but a few months after rereading "Song of the Surfer"--which we'll be getting to in a few weeks. The "dangerous sports" aspect of this story goes over the top; there's a tragic thrill in the idea of a sport whose championship not everyone may survive, but a sport whose championship routinely slaughters most of its competitors doesn't seem like it could attract a lot of top athletes, you know? (Wagner addresses that a bit in "Song of the Surfer," but it passes without comment here.) 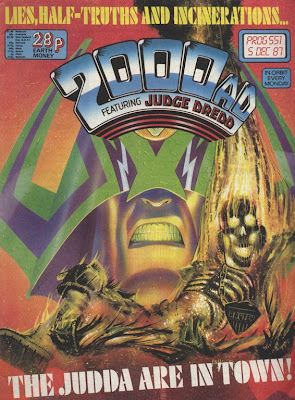 So the pleasures of "Oz" are less about its overall arc than its individual moments. I particularly love the sequence where the turtle gets another chance at life, which lasts all of five panels, but there are lots of other well-turned bits: Chopper going down in the storm, hearing everyone calling his name again; the "Space World" sequence, which gives Barry Kitson an opportunity to draw a very different sort of sci-fi image; McCarthy's image of Wipeout crouching on his board; the color spread being reserved for the final two pages of part 20. (Whoops, that's another one that's not so effective in the printed book.)

The end of "Oz" was, famously, one of the major factors in the end of the Grant/Wagner writing partnership: Grant wanted Dredd to shoot Chopper in the back, Wagner wanted to reserve Chopper for future use. (Wagner has said that "Oz" was less a factor than their miniseries "The Last American" a few years later; Grant claims that Wagner divided up their collaborative gigs at the end of 1987, which would've been right after "Oz." In any case, they kept working together on occasional projects for another decade.) Grant's recollection is that "John wanted Chopper to win, but Dredd to let him go free because he respected him," and says he never read the final episode. In fact, Wagner's ending is a smart solution to the dispute, and doesn't resemble Grant's description. 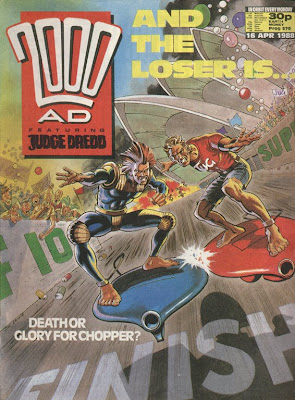 It's not as if the partnership was producing inferior work (although it probably helped that they don't seem to have been quite as overworked in this period); they'd also gotten back to thinking about Dredd as a long game, setting plot threads that could reach into the future. The Judda routine set up the long-running "bloodlines" sequence, but the most durable invention here is an unlikely one: "Bug," the one-off that introduces PJ Maybe, who's still appearing regularly in the series almost 25 years later. The "young serial killer" premise is in place, and it's clear that they were planning on following it up quickly--but PJ's next appearance didn't happen for over a year, and this appearance doesn't suggest the Adrian Mole-style perception/reality split that would go on to define him. (Its other curious aspect: "Karen Berger Block," which appears in the first panel--Berger was arguably the most forward-thinking editor at DC Comics at that point.)

"Simp"--Cliff Robinson's best-looking story to date--ends with a plug for "Simp About the House," which also wouldn't appear for close to another year. "The Return of Death Fist" wraps up a dangling thread from "The Fists of Stan Lee." And then there's the "Revolution" three-parter, the long overdue follow-up to "Letter from a Democrat" and the most consistently fine story in this volume. 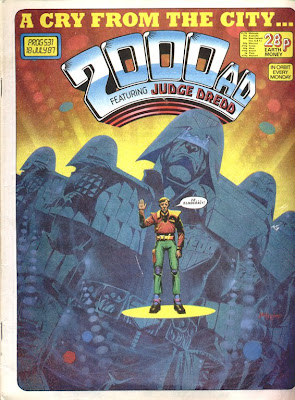 "Revolution" is a particularly timely story this week: it's about a peaceful demonstration, and the dirty tactics authorities use to try to break it up. The democratic coalition's intentions are a lot more specific than Occupy Wall Street's, but it's kind of unnerving that Wagner and Grant assume the people's right to assemble is something even the Judges wouldn't dare to mess with, when that currently seems to be anything but the case. (As Yves Smith puts it: "I’m beginning to wonder whether the right to assemble is effectively dead in the U.S. No one who is a wage slave (which is the overwhelming majority of the population) can afford to have an arrest record, even a misdemeanor, in this age of short job tenures and rising use of background checks.") 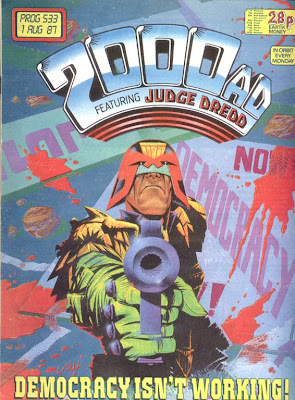 I'm a little surprised that "Revolution" appeared more than a year after "Letter to a Democrat," which it echoes formally as well as in plot--the panel where Blondel Dupre is on TV and someone at home is getting bored and changes the channel, and the repeated images of cowed citizens watching the incidents of the march on TV at home, directly repeat a bit from the earlier story. (It's smart that John Higgins draws this story, too, and his artwork here is much sharper than it was on "Letter.") The nasty judicial tricks that pop up in the closing sequences are appropriately shocking--the "family man" bit is particularly clever, and Judge Silver's paternalistic disapproval in his public speech twists the knife.

The only sour note is Dupre's earnest monologue on the final page, which is stirring where it needs to be stinging. Its implication is that we're finally going to be seeing more stories about Mega-City One's residents trying to get out from under the judicial jackboot, and we don't--not for another couple of years, anyway. 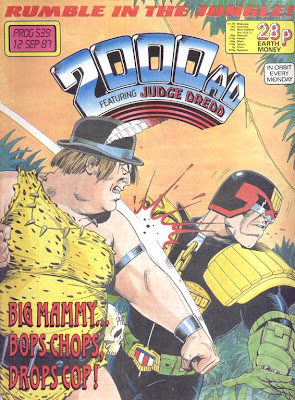 The other one- and two-parters in this volume that don't connect to broader developments generally don't have a lot going for them ("Corporal Punishment" is particularly dippy), and it's hard to understand why the thoroughly forgettable "Alabammy Blimps" sequence got five episodes while "Revolution" was squeezed into three. What "Alabammy Blimps" does have going for it is Steve Dillon's artwork, whose conflict-as-comedy approach prefigures the look he'd adopt for Preacher many years later. "Blimps" and Dillon's chapters of "Oz" were the final Dredd stories he'd draw for a few years: shortly after that serial ended, he and Brett Ewins cut way down on their 2000 AD contributions to concentrate on their new magazine Deadline.

Next week: Case Files 12, in which the Wagner/Grant team's split comes into effect, PJ Maybe comes into his own, and both Dredd and the reprints go full color.
Posted by Douglas Wolk at 11:00 PM