Even as the Megazine significantly increased both the number of Judge Dredd stories and the number of spinoffs that appeared every month, the demand for Dredd product was unstoppable: there were still book-format annuals for both Dredd himself and 2000 AD (which generally featured a few new stories, some illustrated prose pieces, and a handful of reprints), the annual magazine-format Mega-Special and Winter Special a.k.a. Sci-Fi Special, and oddities like the Poster Progs. The stories that ran in those publications in this era, though, generally had some reason they couldn't appear in 2000 AD (or the Megazine) proper. In a few cases, they were too long, or too odd; in other cases, they appear to have been audition pieces for new-to-Dredd creators that didn't quite make the cut to appear in the regular series. 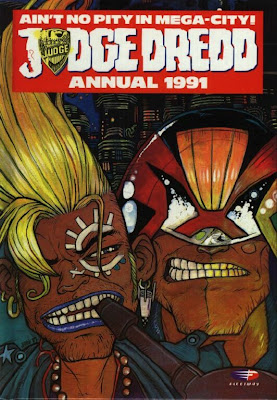 For anyone who missed the wackier side of Dredd, Alan Grant and Cliff Robinson's "Carry On Judging"--which came out smack in the middle of "Necropolis"--must have been a pleasant surprise. (American readers may not know about the "Carry On..." films, a long-running series of double-entendre-filled comedies with an ensemble cast, but this story's very much along those lines.) Unsurprisingly, Grant ended up writing all three of the stories in the 1990 Mega-Special: John Wagner has to have had his hands full with "Necropolis" and the imminently launching Megazine.

Wagner's first entry in this volume, "Top Dogs," is a really strange one--the first team-up of Dredd and Strontium Dog's Johnny Alpha, and the first story to suggest that they were set in the same timeline. (They can't be, really, but never mind that right now.) Note that it would have appeared in early September, 1990--in other words, about six weeks after the end of "The Final Solution" and the Grant-written death of Johnny Alpha, and also while "Necropolis" was still running. Was it originally intended to run as a serial? The three-chapter structure suggests so, its overall length (29 pages) suggests otherwise. Carlos Ezquerra would have been the obvious choice to draw it, but Colin MacNeil at least had experience with both characters; it's an agreeable little crossover, but not anybody's finest hour. Neither is Grant and Paul Marshall's "Jonathan Livingston Dog-Vulture," the other new story in the 1991 Dredd Annual, whose title takes that particular joke as far as it's going to go.

As for those audition pieces: After the writer-go-round of 2000 AD's first year or so, Dredd had been very firmly staked out as Wagner and Grant's territory. (When Alan Moore had written a sample Dredd script circa 1980, he'd been informed that nobody else got to touch the character.) So (20-year-old!) Mark Millar and Brett Ewins' "Christmas Is Cancelled," from the 1990 2000 AD Winter Special--published immediately after "Necropolis"--was a watershed: the first official Dredd story in many years written by someone other than the core duo. Another 20-year-old, Garth Ennis, saw his Chopper serial begin in the Megazine around the same time, and his first Dredd story, "Death Aid," appeared a couple of months later; I'll be talking more about that next week. 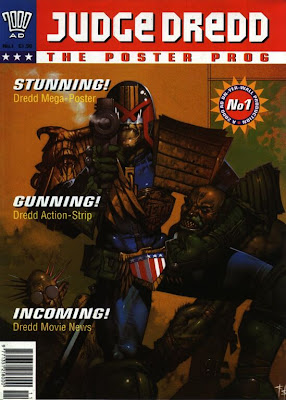 A lot of these first attempts at writing Dredd are terribly wobbly, though. Some of them come off like nervous imitations of lesser Wagner, like Millar's piece and the two stories written by Transformers' Simon Furman (who would go on to write a handful of stories in the kid-aimed Judge Dredd: Lawman of the Future series). Dan Abnett succumbs to Grant's occasional here's-what-I've-been-reading-lately tendency in "The Mystery of Judge (Edwin) Drood," a string of Dickens allusions with no particular point; his future collaborator Andy Lanning's "The Juve Mutated Kung Fu Kleggs" might have been a bit funnier if Dredd hadn't already done a TMNT parody a couple of years earlier ("Eldster Vigilante Mud-Wrestling Ninjas"). And "Sonny Steelgrave" appears to have been a pseudonym for Alan McKenzie, who I believe was Tharg's earthly assistant at that point; his "Cage of Knives" is one of too many stories in a row here that involve "mysteries that science just doesn't seem to be able to explain," as an old issue of Yummy Fur put it.

A couple of stories here seem to have been Dredd auditions for artists, too: Geoff Senior's artwork for "The Sleeper" is so run-of-the-mill that it nearly sinks Wagner's clever concept, and Glynn Dillon's art on "Cult of the Thugee" encapsulates everything that could go wrong with the initial wave of painted comics--for all the care that went into its rendering, it's pretty much unreadable. Greg Staples' first published Dredd story, "The Squealer," worked out considerably better; at that point, he was still a bit of a Simon Bisley clone, but that's not a bad thing to be. 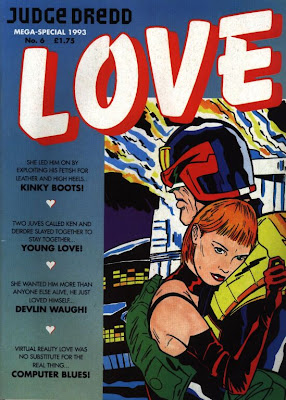 Then there are pieces that are fine in their way but simply not right for the ongoing series, or deliberately noncanonical, like Peter Milligan and Shaky Kane's lovely, batty psychedelic Kirby homage "Judge Planet," or "Joovz 'n' the Hood" with its bizarrely amateurish-looking artwork, or Robbie Morrison and Paul Grist's off-model-and-loving-it Avengers homage "Kinky Boots." Wagner and John Burns' modern-art goof "Virtual Unreality," likewise, is far sillier than the weekly ever got at that point, though I will give Burns credit for taking up almost the entire first page with a gigantic foot.

That's not the only head-scratcher here by Dredd regulars (aside from Wagner and Ian Gibson's reunion for "Love Story II: Futile Attraction," a sequel to a six-year-old story that would have made a perfectly fine weekly episode; they'd follow it up again another eleven years later). Just a few years after "Oz" and "Four Dark Judges," Brett Ewins and the uncredited but signed Brendan McCarthy's artwork on "Parallel Lines" seems like a stylistic throwback--and, in fact, their earlier work on Dredd didn't look much like this, or anywhere near as loose. Lots of peculiar visual gestures, too: in the scene with McGruder, we see her head three times, always from the same strange angle and with her face in shadow. 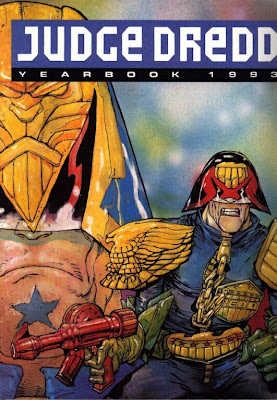 As for the other long story in this volume, one commenter on 2000 AD's message boards described "Serial Killer" as "perhaps the worst John Wagner-scripted Dredd strip I've ever read." It's far from Wagner's best, but I do like the fake-out at the beginning--the "right hand" gag is exactly the same one that appeared in "The Graveyard Shift" years earlier, and at exactly the moment you start thinking that Wagner's repeating himself, it turns out that that's the point, and that he's doing a "Silence of the Lambs" riff. It's also the only Dredd story Simon Hunter ever drew; his artwork, heavily mannered and texture-modeled, could have been ideal for a series that was conceived as light comedy and nothing else, but it doesn't quite work for this one. And the way he draws characters' faces exactly the same (very stiff) way from panel to panel reminds me a bit of Fletcher Hanks.

Next week, we begin the next level of Dredd madness: the first issue of Judge Dredd Megazine went on sale a couple of weeks before the end of "Necropolis," so we're going to plunge into it with The Complete Case Files 15 (in which Wagner and Ennis get ready for the big hand-off), and then investigate the early Megazine strips for the following few weeks.
Posted by Douglas Wolk at 11:00 PM