The Art of Kenny Who?: The Cam Kennedy Collection

There have only been a few Judge Dredd collections focused on a single artist's work rather than thematically related, or unrelated, material: Dredd Vs. Death (which compiles a lot of Brian Bolland's work), the more recent Henry Flint and Carlos Ezquerra collections, the 1993 one-shot Dredd by Bisley (collecting Simon Bisley's Heavy Metal Dredd material), and this one. The Art of Kenny Who? doesn't quite cover all of Cam Kennedy's otherwise unreprinted stories, but it's the bulk of them. 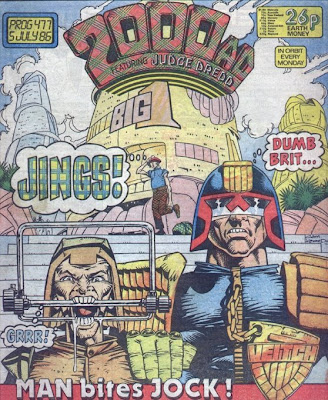 When I first encountered Kennedy's work on Dredd, as a callow youth, I thought it was perfectly OK but nothing spectacular: I gravitated toward Ezquerra's grit, Ron Smith's goofiness, Brendan McCarthy's psychedelic flashiness. As an even callower adult, I've warmed to Kennedy's art--I like that crinkly, shaggy line of his, and the way his images shove at their panel borders just enough to give the sense that the action is rattling the page without interfering with its clarity.

Still, I usually prefer Kennedy's dramatic/suspenseful stuff to his comedy, which sometimes seems too broad to me. (My favorite work of his generally treads the line between them, like "The Taxidermist.") In his early Dredd episodes, he mostly got to draw John Wagner and Alan Grant's more straight-faced stories ("The Midnight Surfer," etc.), with a few detours into funny stuff--most promisingly "The Art of Kenny Who?," in which Wagner and Grant translated his maddening experiences breaking into American comics into a Mega-City One story. Then he took most of the '90s off from Dredd; in his intermittent appearances since 2000, he's mostly been a comedy-relief guy.

The original Kenny Who? story gets reprinted here, along with its sequels, "Beyond Our Kenny" and "Who? Dares Wins"; "Bodies of Evidence" is another goof on Scottish culture, although I'm betting that as an American I'm ony getting about a quarter of its jokes. (Does somebody want to explain Ilova Freebie and Murdo McLearance to me?) Really, what's amazing is that there hadn't been much in the way of Scottish content in Judge Dredd before "The Art of Kenny Who?"--as one commenter pointed out last week, John Wagner grew up in Scotland, as did Alan Grant. (And when Garth Ennis arrived on Dredd, he wasted no time getting to "Emerald Isle.")

"Beyond Our Kenny" was the one undiluted comedy feature in the initial incarnation of the Megazine, and if Wagner and Kennedy had been indignant about the state of the comics business at the time of the first Kenny Who? story, they were apparently outright furious by the time they did this one. Wagner was writing three of the five strips in the Megazine at first, and he and Alan Grant were listed as "consulting editors" in the indicia--but he didn't get a cut of his most successful co-creation, and he had creative control of Dredd on the page de facto rather than de jure (and none beyond that). Hence, I'm guessing, the sequence in the first episode here where the plot stops dead for a page and a half so we can get this: 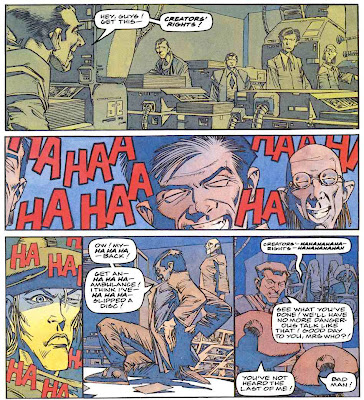 Right. Ow. It's worth noting that the movement toward comics creators' rights was a relatively new thing in 1990--here's the "Bill of Rights for Comics Creators" that was drafted in 1988 and published in The Comics Journal in 1990. But another thing that's worth noting about this is the fantastic color scheme of Kennedy's work throughout "Beyond Our Kenny": he's working with a limited and very odd palette, and mostly substituting dark shades for solid blacks. The closest thing I've seen to it, in some ways, is Frazer Irving's recent color work; not even Kennedy himself has gone back to this technique, as far as I know, and it's really nice-looking.

As for "Who? Dares Wins"--well, it's pretty funny, but its premise depends on the idea that Mega-City One has appeals courts, which doesn't seem terribly likely. Have we seen any before or since? 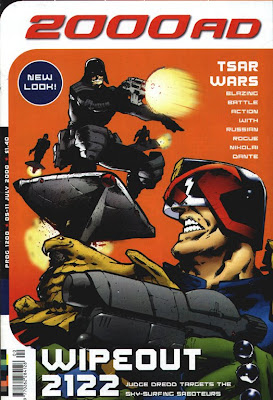 The one story here where Kennedy gets to play it completely straight is "SABs" (which started in 2000's Prog 1200, the first issue edited by Andy Diggle). It's got a very tight, smart, angry Wagner script: it's about resistance to the rise of the surveillance state, and it was published just as the Regulation of Investigatory Powers Act was going through Parliament. I'm a sucker for stories about exactly how sick the Judge system is (and how close it is to our current culture), and this one nails it, flipping between brave-but-doomed acts of civil disobedience and police-procedural stuff that's driven by exactly the same technology the SABs are more than a century too late to fight for real. All they can do is make a show of fighting back, and it gets them nowhere.

(A quick note on that cover: it's by Trevor Hairsine rather than Kennedy, for some reason, and it introduced one of the rare 2000 AD redesigns that really, really didn't work. Prog 1234, pictured below--and containing the first chapter of "Bodies of Evidence," so it's relevant, see!--reverted to the late-'80s design, and had a cover by John Higgins, patterned on his own cover for the issue that had introduced that logo in the first place.) 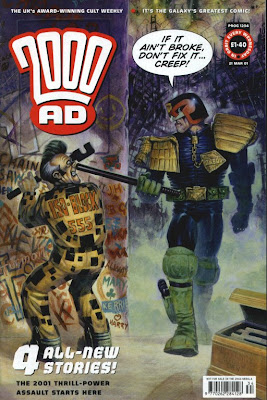 After "SABs," the silly stuff is mostly disappointing, particularly when Wagner (and Gordon Rennie, in one instance) aim at very slow-moving targets. Fat people: hilarious, right? (It's a little hard to believe that Wagner launched Volume 4 of the Megazine with "The Bazooka," a much weaker retread of territory he and Kennedy had already covered with "The Magnificent Obsession.") The royals and other celebrities: amusing, yes? Incredibly stupid people: funny, huh? Obscene gestures: a laugh riot, check? And so on. (Okay, fine: I laughed at the Branch Moronians story a few times. Although I wish I'd gotten to read the earlier episodes with them first.)

The one other little gem here is "Big Deal at Drekk City," a neatly turned variation on the old "Hotdog Run" formula. It's not going to make anybody's list of all-time classics, but it's a good example of Wagner doing sharp character work in the context of an ultraviolent adventure story, as well as worldbuilding like crazy (having Dredd quiz the cadets on their knowledge shoehorns in a bunch of exposition painlessly).  And I cracked up at the "playing cards as lawbook" routine, which is actually a parody of an obscure bit of American culture: "Deck of Cards," a #2 country hit for T. Texas Tyler in 1948 (above) that returned in a Top Ten pop version by Wink Martindale in 1959. ("When I look at the ace, it reminds me that there is but one God," etc.--the premise of the card deck as prayer book dates back to the eighteenth century, but it's clearly the recorded version that Wagner is riffing on here.)

Incidentally, you may have noticed a certain paucity of Kennedy-drawn covers in this week's post. That's because, bizarrely, Kennedy has drawn exactly two covers for 2000 AD or the Megazine since the Kenny Who? cover of the issue that opens this book: 2000 AD #718 ("La Placa Rifa"), and the Hoolie image from Megazine #229 that was recycled for this volume's cover. He also drew the Judge Child cover below for the U.S. reprint series, a few years earlier: 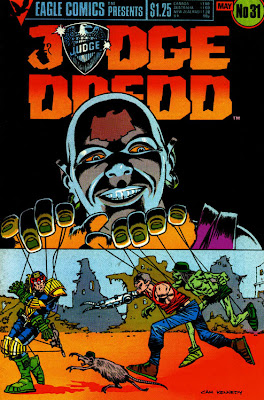 Next week: we shift over to Judge Anderson briefly for Shamballa, a collection of a cluster of stories by Alan Grant and Arthur Ranson.
Posted by Douglas Wolk at 11:00 PM