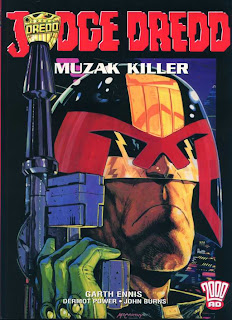 My, it's been an interesting few days on the Dredd front--the big deal being, of course, the announcement that IDW will be publishing both a new monthly series and vintage Dredd reprints of some kind in the U.S. I'm curious to see how it all pans out (and if this will be simultaneous with the Simon & Schuster reprints), and am crossing my fingers that IDW--who are so good about honoring the original presentation of newspaper strips in their reprints--will be reprinting the older material in a format that doesn't butcher its layouts like the '90s U.S. versions.


In the meantime, this is going to be the most filler-y Dredd Reckoning to date, because our final encounter with Garth Ennis's Dredd run for the moment (we'll have at least two more before we're done) contains very little new-to-this-blog material--just the three-part "Muzak Killer - Live!" from Progs 837-839. It's also got the original "Muzak Killer," plus "Raider," "Teddy Choppermitz," and the unusually straightforward Brendan McCarthy cover seen above.

The Muzak Killer stories are interesting to me mostly because they're among the very few Dredd stories to directly assert the correctness of a particular set of tastes in another medium. Marty Zpok is a deranged serial murderer with whose aesthetics we're supposed to directly identify: what music critics refer to as "rockism," roughly. (That's kind of a contentious term, but it basically means the idea that guitar-based rock music is normative, and that any other kind of popular music is good and meaningful to the extent that its interests overlap with rock's.) So he's pro-Smiths, pro-Carter USM, pro-Clash--but he rejects the tastes of Robert Smith lookalike Indiana "Indy" Saddoe, shoots a Sinéad O'Connor lookalike, etc. "Music is only cool when it's old," he says in "Live": I have to suspect Ennis developed a little more distance from Zpok in the two years between the two stories. 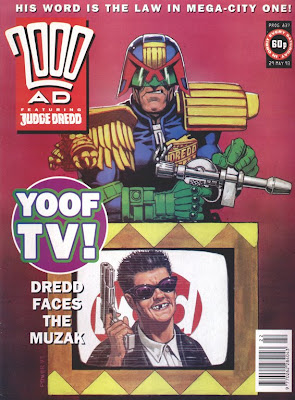 The textual punch line is that once Marty Zpok's been lobotomized, he totally loves "I Should Be So Lucky," which is supposed to serve as the epitome of lowest-common-denominator pop. The extratextual punch line is that, almost 25 years after "I Should Be So Lucky," it's effectively "classic" in the same way that "These Boots Were Made For Walking" is in the original "Muzak Killer." Music is always cool when it's old. Then add in the fact that this story's set 122 years in the future, and all of a sudden value judgements become completely impossible. Come on: can you identify which of the hits of 1890 were cool and which were lame? Which is obviously more 2000 AD-reader-friendly, "The Thunderer" or "The Laughing Song"?

I will say, though, that the Richey Edwards lookalike's fatal demonstration of "authenticity" is pretty much on the mark (it'd be a lot funnier if Richey were still with us, though).

This is probably the most appropriate place to offer a quick gallery of Dredd-inspired songs, in anticipation of Geoff Barrow and Ben Salisbury's Drokk. Dredd himself arguably got his name (in a roundabout way) from the Judge Dread who was the first white artist to have a reggae hit in Jamaica (that would be "Big Six"); he, in turn, got the name from Prince Buster's 1967 "Judge Dread." But as far as I can tell, the first pop record to allude to the 2000 AD version of the character was the Human League's "I Am the Law," from their 1981 album Dare. Who knows: that might be at least covertly a Dan Dare reference!


It wasn't until 1985, though, that there was a blatantly Dredd-based song: the Fink Brothers (a.k.a. some moonlighting members of Madness) recorded "Mutants in Mega-City One," whose Brian Bolland-drawn cover image was repurposed for a 2000 AD cover. Not their finest hour, honestly.


And Anthrax's "I Am the Law," from 1987, is the veriest heavy-metal-Dredd song released to date--not their best song either, and it takes its subject a little too seriously, but they get points for namedropping Anderson and iso-cubes.


In 1989, the Screaming Blue Messiahs recorded "Mega-City One," whose lyrics revealed a decently deep knowledge of Dredd lore (nice reference to "The Graveyard Shift") when they weren't pointlessly quoting "Sex Machine." Pity about the total tunelessness, though.


Only three years later, in 1992, there was a proto-drum-'n'-bass act called Mega City 2, who recorded the cult-item track "Darker Side of Evil"--those samples are from Predator 2. Presumably, they named themselves that before "Judgment Day."


A song called "Mega City 3," though, had come out in 1982--as a Rough Trade single by Spizzenergi:2. It's by far my favorite of these songs, because I am an Indiana Saddoe type.


Finally, there was Mega City Four, who made a whole mess of records between 1987 and 1996; here's their first single, "Miles Apart."


If that's not enough music for the moment, I put together a little playlist of Dredd-related (or not-actually-Dredd-related) songs over at Spotify. Next week, we get back to comics we (mostly) haven't seen yet, with the curious omnium-gatherum Lenny Zero and the Perps of Mega-City One, collecting the intermittent appearances of Lenny Zero, Slick Dickens and Bato Loco.
Posted by Douglas Wolk at 11:00 PM