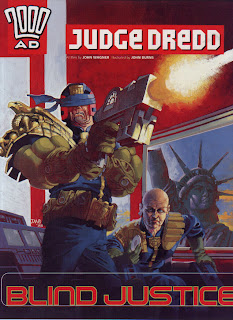 Given the recent suggestion that IDW's going to be publishing a "complete Brian Bolland Judge Dredd" book--and it's hard for me to believe that's exactly accurate, especially since we're unlikely to see "Soul Food" in there--it's worth noting that Blind Justice is another one of the relatively rare Dredd collections devoted specifically to the work of a particular artist. This one collects the bulk of the episodes John Burns painted in the mid-'90s, which doesn't make it all that bulky. (Burns actually drew one other Megazine episode in the same period as "Sleaze," "Stone Killer" in #3.43, but it doesn't appear here, and isn't that good anyway.) The back pages' "Holiday Special," "Lonesome Dave" and "Horror House" seem somewhat filler-y in this context, too; they're all a kind of dry comedy for which Burns isn't the first Dredd artist who comes to mind.

These days, Burns is mostly associated with Nikolai Dante, for whose adventures he clearly has a special fondness. As for Dredd--well, Burns' 2004 Megazine interview included gems like "I don't like drawing all this space-age stuff" and "I hate drawing Judge Dredd, I really do!... It's just his outfit. If you were to wear something like that in real life, you wouldn't be able to move!"

And, although Burns' artwork is totally solid as always, that unfondness comes through a little. As beautiful as any given panel of this book can be, there often seems to be something missing from a page or a sequence. Burns gives us a lot of long establishing shots and extreme close-ups, without a lot of middle-distance imagery that would require more stuff that's tedious to draw. I believe he was the first to draw Jura Edgar, and she's a a splendid piece of design, although we never get a clear look at her hoverchair here; her facial expression is stuck in the "grim, resentful determination" range, and Dredd's is limited already by convention. (Burns drew the cover of the collection, but not any of the covers of the issues included here; that's why those issues' full-page images by Brett Ewins and Doug Braithwaite are providing the breathers for this week's copy.) 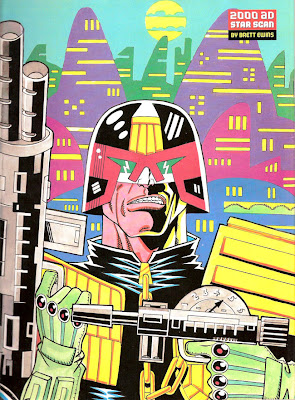 What "The Cal Files" and "Sleaze" really opened up was the panopticon of Dredd's world. State surveillance was just starting to be more obvious in Britain in the mid-'90s, although Wagner seems to have been paying it attention for a long time. But the Public Surveillance Unit--first mentioned in "Statue of Judgement," fleshed out in "The Cal Files" a few weeks later--is a particularly clever storytelling device. It rid Wagner and other Dredd writers of the need to set up coincidences to let Judges know things; unlike the lie detectors that Wagner occasionally bemoans, the PSU allows him to cut to the chase without damaging a story's drama. And it made Mega-City One an even fiercer caricature of our own world, especially given what we see of the Judges in charge of collecting information on citizens. Edgar is a sadistic control freak (even from beyond the grave); later on, it's evident that the reason Roffman is a brilliant PSU Judge is that he's a stalker-level voyeur.

This was also the period where Wagner started setting up long-term plots and consequences for the series. The appearance of "J. Edgar Hover" (possibly the worst pun the series had seen since 2T(FRU)T) was the first time Dredd had really been seen to have a rival within the power structure of Justice Dept., and the plotline involving Dredd possibly having a biological mother planted seeds that would sprout in Origins ten years later. Somewhat malformed seeds (there are hardcore Dredd fanatics who insist that there's a serious continuity glitch there, although if I can believe that the technology of Dredd's time allows for pregnant men, I can believe that it allows for pregnant sixty-year-old women), but seeds nonetheless. I haven't re-read Origins in a few years, so I'll tackle all that stuff when I get there.

I'll grant that "The Cal Files" seems like a slightly distracted realization of a good idea. Chass drinking Old Spleen and KK Calbraith--per Burns' art--or Galbraith--per the lettering--having Arden Polders' transplanted spleen are each amusing on their own, but in the same story they're too much. The same goes for the big revelation at the heart of the story: if Arden Polders' twin sons' DNA is identical to Dredd and Rico's, then she can't have been Fargo's sister. Either she's Dredd and Rico's mother after all, which is awfully unlikely considering that Dredd has no memories before the Academy of Law and that every other bit of canon we've got suggests that Dredd is in fact a clone, or she's the mother of Eustace and Ephram Fargo. The very well-preserved mother, that (terrific) image of her as a Jane Doe suggests. 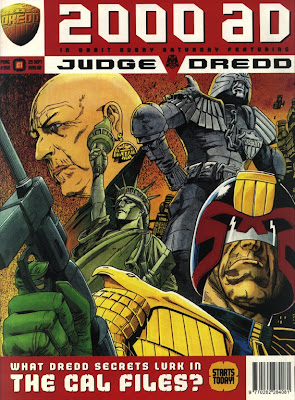 Wagner is also gearing up for his next big storyline, "The Pit," in Dredd's conversation with Volt in the final episode of "The Cal Files." Rohan, who Volt says had been shot that morning, seems to have lingered a bit: she dies two hours before the beginning of "The Pit," seven issues later. (Hence, maybe, Dredd's comment that it's going to take him a few weeks to deal with his "current caseload"--the intervening issues included stories written by Alan Grant, Dan Abnett and Mark Millar.)

A further note on what we're skipping over: there are a lot of episodes from 1995 that haven't been reprinted in book form, including the nine-part, Wagner-written "The Exterminator." In July of that year, around the release of the Judge Dredd movie, 2000 AD raised its price (from 80p to a pound) and its page count (to 40 pages). From Prog 950 to 963, there were two episodes of Dredd in each issue, so there's even more unreprinted material from this period than you might guess, including two notable Pat Mills-written stories: "Flashback 2099: The Return of Rico" (a rewrite of the original "Return of Rico" which I've mentioned before as introducing a few mild continuity questions of its own) and "Hammerstein" (which connects Dredd's continuity to the ABC Warriors end of the Millsverse as a tie-in with the film).