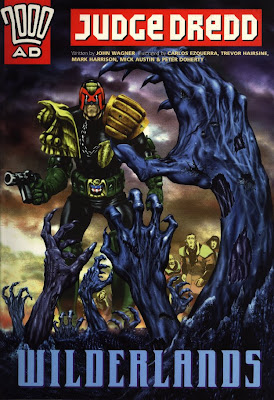 "Wilderlands" was an unusually ambitious story, halfway done in by its reach exceeding its grasp, and kneecapped by a still-mysterious internal continuity disaster. In 1994, with the Judge Dredd movie a year away, John Wagner returned to writing the strip in 2000 AD on a regular basis, and was convinced to come up with a second crossover between the Prog and the Megazine. This one had a lot of formal restrictions imposed on it from the outset, though. It had to be smaller in scale, so it wouldn't repeat the eschatological scope of "Necropolis" and "Judgement Day"--but it also had to be big enough that it would Change Everything Forever OMG. It also had to make sense to readers who were only following 2000 AD, or only following the Megazine, without repeating itself too much for those who were reading both. 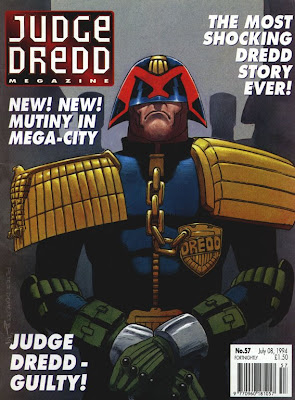 So the story's schedule played a peculiar hopscotch game. After a two-part reunion of the Wagner/Carlos Ezquerra team, "Time Machine" (which has still never been reprinted), the introductory "Conspiracy of Silence" sequence ran in 2000 AD in June: a primer on the Mechanismo plot and the Dredd/McGruder conflict that Wagner had been building in the Megazine for a year or so. Its final chapter leads directly into "Prologue," in the Megazine, which came out the same week. (Artist Peter Doherty doesn't seem to have noticed that McGruder had shaved off her goatee a while back--and after Mark Harrison drew her in "Conspiracy of Silence" with a can of "Whisk-Away," too!) While "Prologue" and "The Tenth Planet" were running in the biweekly Megazine, 2000 AD was marking time with some episodes written by Dan Abnett and Chris Standley, as well as the final Wagner/Ron Smith collaboration in Prog 899, the Dredd/Rogue Trooper team-up that occupied all of Prog 900, and the evergreen "Judge Death: The True Story" (which we'll be getting to next week).

The "Tenth Planet" sequence is the high point of this book: prime Wagner/Ezquerra, fast, dark and twisty, with a lot of spectacular imagery and a sensory-overload "land sharks inside the cage" sequence. It also includes one of my favorite Dredd character moments, in which he pulls off the neat trick of simultaneously demanding Castillo's respect, refusing it, attacking her and letting her know he's looking out for her: 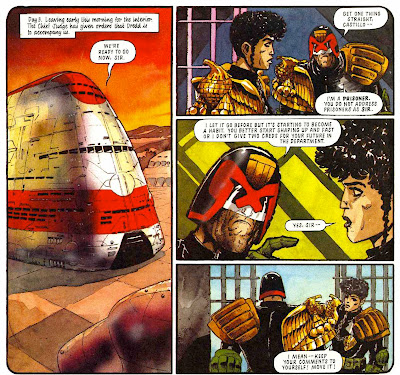 And how awesome is it that even though Dredd is officially off the force, he's still going everywhere in not only his helmet but his complete uniform, just no badge?

Ezquerra's new toy shows up partway through "The Tenth Planet": the digital coloring tools that were probably intended to save him time but ended up dating his artwork here badly. I'm sure the particular Photoshop filters he used for the surface of Hestia and various backgrounds would be easy for someone who was using that program in '94 to name. (There are some backgrounds and city shots that are clearly assembled by software rather than drawn by hand, too, and they're a little jarring.) Having easy access to a range of computer hues also meant that Ezquerra all but abandoned the single-color-dominated images that had been such a striking part of his work in the early '90s. 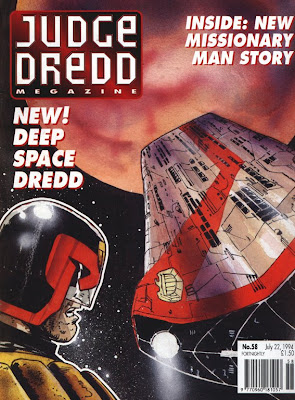 The ending of "The Tenth Planet" segues directly into "Wilderlands" proper, which began in 2000 AD the same week and galumphed along in both titles simultaneously, this time with Ezquerra drawing the 2000 AD sections and Trevor Hairsine drawing the Megazine sections. I can see what Wagner seems to have had in mind: a very densely packed story whose plot threads would include Dredd trying to keep the Hestia expedition alive in hostile territory while they're picked off one by one (à la "Helltrekkers") and while both the convicts and other Judges are conspiring against him, McGruder being convinced that she was wrong about Dredd, the dark secret of Mechanismo being revealed, Castillo redeeming herself from her earlier failure of nerve with the aid of Phoenix the kindly willowy native Hestian, and ultimately a massive shift in the balance of power within Justice Department. This would all have a grand, open pace that would allow for readers of just one series or just the other or both to follow it, and--oh, right: "very densely packed" and "grand, open pace" don't fit so well together. 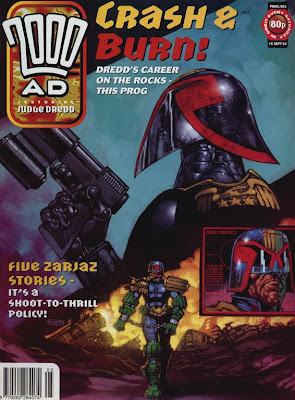 That trips up "Wilderlands" pretty badly: a lot of stuff is clearly supposed to happen, and not a lot happens. The device of having the weekly episodes focus on Dredd's experience and the Megazine episodes narrated by Castillo kinda-sorta works, until Castillo takes off on her mission--for which Wagner ticks off a few plot beats and otherwise has to pad two nine-page episodes with "huh, guess we're walking across a desert here" moments. The Megazine sequence's slackness is partly down to the fact that it's so bumpy visually. Hairsine was a very new artist at that point--he'd never drawn color comics before, and was still working out the kinks in his storytelling. (There's a figure in his first chapter of "Wilderlands" that's pretty blatantly swiped from something by Neal Adams; can anyone identify its source?) 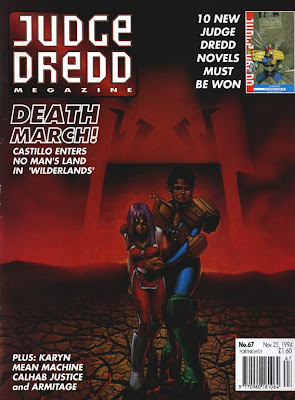 David Bishop's history of the Megazine suggests that one point of reference for "Wilderlands" was "Darkie's Mob" (file under: really regrettable titles), a grim, violent WWII strip that Wagner had written for Battle in 1976-77, about a mysterious tough guy leading a squadron in the Burmese jungle. That was another super-densely packed series, though (it was reprinted about ten years ago in the Megazine), with much more plot than the pace of "Wilderlands" could handle. Dredd's "leadership" in this story pretty much consists of beating the robot, sending out a search party, shooting Hine through the heart (after "disconnecting the grip sensors"--oh, is that all you have to do to modify a Lawgiver so it won't pull a Kraken on you?) and then being surprised when he dies, and not eating much of the hallucinogenic food. One smart and relatively subtle point of the "Wilderlands" sequence where everyone hallucinates, though: their visions are the Mirror of Erised. It's clear that what each of them is seeing is what that person most longs to see at that moment... and what Dredd sees is McGruder's picked-over corpse.

Then there's that continuity disaster. I don't know if this was addressed at the time, but it's fairly obvious that there's at least part of an episode of "Wilderlands" that never got published. Chapter 13--which appeared in Prog 912, the only episode in 2000 AD drawn by Mick Austin rather than Carlos Ezquerra--picks up from a cliffhanger we never actually see, in which Dredd is being attacked by a robot. (Mind you, the robot appeared on the cover of #911, although not in the story inside...) Right before the end of chapter 11, Beasty bashes Tefler's head in, just as Tefler fires his gun, which Dredd and O'Hare both hear. When we get back to that scene in chapter 13, Dredd fires at the robot, which Tefler hears... right before Tefler and Moynihan are ambushed by Beasty and Conehead. (Conehead then shoots Tefler with his own Lawgiver, which also doesn't explode.) 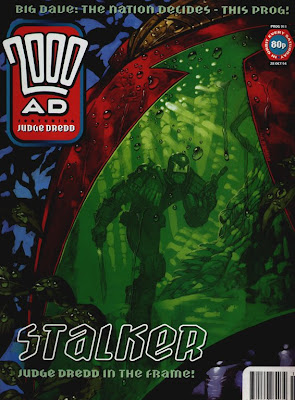 Austin mentioned in a recent Megazine interview that he had been frustrated by being 2000 AD's go-to guy for last-minute artwork, and both that episode and his half of "The Candidates" do look pretty rushed. Maybe Austin got sent the wrong draft of a script; maybe Ezquerra fell behind schedule more quickly than expected and the only completed episode on hand at deadline time was that one. Anyone happen to know what happened? Actually, Ezquerra's artwork on the second half of "The Candidates" and "Voting Day" looks very rushed too, as if he didn't have time to ink it in more than a cursory way.

By the end of the book, McGruder has turned her opinion of Dredd and Mechanismo around in a matter of a few panels, Castillo has been successful in her assignment rather than actually overcoming anything in particular, Justice Department isn't too different in any way other than the previously unseen Hadrian Volt replacing McGruder, and Mechanismo's dark secret remains opaque (as I think it still does). Even the Wilderlands collection cuts off abruptly: there was an epilogue in the Megazine, "Farewell to the Chief," that didn't get reprinted in the collection. It's not great, but it does give Castillo's arc a bit more closure.

Next week: special guest David Wolkin and I make a timely visit to Dark Judges territory for Death Lives!
Posted by Douglas Wolk at 11:00 PM