With the Dredd movie due out in a couple of months and Olivia Thirlby about to kick ass all over movie screens, it was not at all a bad idea to put together an Anderson-specific volume for the American book market.* ** I'm not totally convinced that giving it a title that's very easy to confuse with The Psi Files was the wisest use of the English language, but whatever, it's 150 pages or so of mostly*** unreprinted Anderson stories in glorious color, who's complaining? 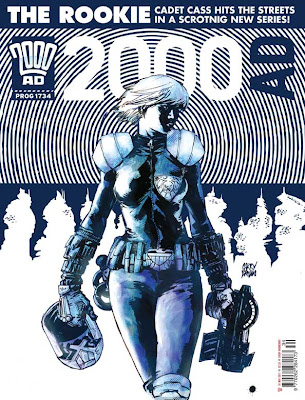 * This is the first blog entry I've written since I got to see the movie, and it's not clear whether I'm going to be writing about it elsewhere at some length, but the short version is: I liked it a lot. Generally terrific script, on-the-money performances, highly thrill-powered, extremely violent. Excellent use of both 3-D and slow-mo, i.e. things you can do in movies but not comics. For those of you wondering if it's comics-canonical: not 100%, but I wouldn't want it to be, either, and it's altered in ways that make it work better as a movie.*** And, to the extent that it is canon-congruent, it seems to be set a couple of months before Prog 2. How about that? Plus Karl Urban turns out to be a confirmed Squaxx.

** Also, that thing I mentioned a couple of weeks ago about how "Judges going bad doesn't seem to be a big plot element in the movie": yeah, I was very wrong about that.

*** The exception to that "mostly" is "The Random Man," now on its fourth go-'round; Carlos Ezquerra's color artwork was was poorly served by black-and-white reproduction in the first Psi Files volume, though, so it's welcome here. I also hadn't realized before that diceman Sam Laffin's name was a Jimi Hendrix joke, for what that's worth.

**** Four stars for a four-star trainspottery note: there actually is a never-reprinted, Wagner/Grant-written "how Joe met Cass" story that's nothing like what we see in the movie, but it's the one I've mentioned before from the first four issues of the American series Legends of the Law.

As a latter-day Anderson collection, this is entirely Alan Grant's show on the writing side. I often end up wrestling with Grant's solo writing, partly because his gift for world-building is often nudged off balance by the "I've just read the most interesting book--here's a story directly inspired by something I read in it" syndrome, partly because he can let stories get out of hand and then speed them to their emotional-beat conclusion without bothering to resolve the plot. See, for instance, the end of "House of Vyle": "Somehow, the spirits of the Salem witches--the radioactivity from two atomic wars--Arterio Drac's magic--all combined to turn the house into almost a living thing." Oh, did they? I'm not asking for a Scooby-Doo "meddling kids" wrap-up, but some acknowledgement that the last few dozen pages were anything other than inexplicable would be welcome. 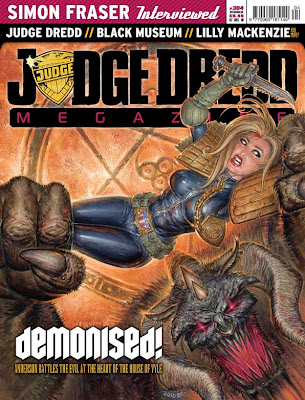 I've mentioned before that Anderson: Psi-Division as a series keeps running up against the difficulties of being about supernatural phenomena in the hard-SF context of the Dredd universe, and of having a protagonist who can effectively think almost any plot into its resolution. More recently, there's been the additional road-bump that Wagner's part of that world and Grant's tend to steer clear of one another. Wagner used Psi-Division to set up "Day of Chaos"--but in the person of Hennessy, who's more of a Cassandra than Cass is (and, actually, a weak psychic makes for a more interesting character than a strong one: Hennessy's inability to make sense of her precognitive flashes makes the story more suspenseful). I don't think we ever found out what Anderson or the rest of Psi-Div were up to once the heavy stuff started coming down. Likewise, I don't get the sense that the later stories happen in a setting that's changed significantly since, say, "Oz," beyond Anderson having someone new to call "C.J." every so often. On the other hand, Grant's prose story "The Pack" in the new Megazine is set post-Chaos Day; maybe the Anderson story that starts next issue will be too?

Grant's setting the "Cadet Anderson" material in the period when she's just figuring out what she's doing is a smart way of getting around some of those issues. I've seen interviews with Grant where he's mentioned being happy about Anderson aging in real time--she has to be in her mid-fifties in current continuity, so there's maybe something extra-untoward about e.g. rookie Aicer's being in love with her in "Wiierd"--but writing her as a teenager dodges that too, curiously. It's a head-scratcher that the underclass youth of the late 21st century would dress like the punks of 1976, although I do love that Sean Phillips cover of young Cass, below. Too bad about the ending, which hits two overfamiliar Grant/Anderson notes: Abusing Children Is Bad, and Cass Has Compassion For Even Her Enemies. 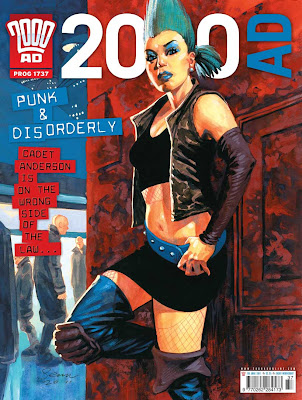 The one real anomaly here is "Lawless," whose only evident reason to show up is that Anderson does something in the course of it that's a bit like something she does in the movie. It's a throwaway two-parter from 1998 that's mostly notable for the fact that the antagonist is very similar to Anarky, the surprisingly durable character Grant created for Batman in the late '80s. Grant also wrote an Anarky miniseries that had come out in 1997--and I'd forgotten that Anarky's political sensibilities were partly shaped by a correspondent named Xuasus! (Anybody happen to know if Lawless has ever turned up since this story?)

The bulk of this volume is the Anderson stories drawn by Boo Cook between 2008 and 2010 (but not the most recent one, "The Trip," which I liked a lot). The way Cook draws figures and the way he draws backgrounds are often very different, which can be jarring in some circumstances, but works out nicely for Anderson stories--particularly for "House of Vyle" and "Wiierd," both of which place people in not-quite-right contexts. ("Wiierd" signals that from the get-go--three pages of Tharg vs. Bill Savage before we even get a glimpse of Mega-City One!) Cook's color technique for each of his stories is really terrific, too: nuanced, unsettling, several notches too garish and vivid to be reality as we know it. 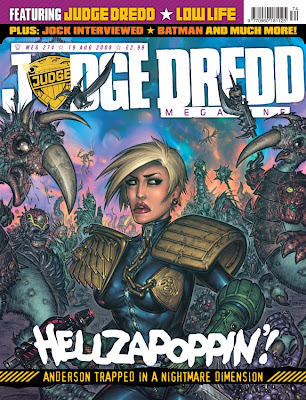 I'd also really love to see more Brendan McCarthy-drawn Anderson--the cover of this volume is a wonder. The contrast between Carlos Ezquerra's artwork in 1989's "The Random Man" and 2011's "Teenage Kyx," conversely, is a little bit vexing. Ezquerra's getting-the-story-across chops are inalienable, and his line is a lot cleaner when he collaborates with his son Hector, but "cleanness" has never been his selling point for me. I miss him slopping watercolors all over the place, inking with a broken tree branch, letting figures and objects protrude out of their panels in a way that seems willy-nilly but actually almost always leads the eye where it's supposed to go. There's something strange about the way Ezquerra draws faces now, too--it reminds me of ROM-era Steve Ditko, actually, and the way he'd reduced his art-board-scoring lines to blobby gestures.

A bibliographic note: Besides the early stories I mentioned in the context of Psi Files 02, the still-unreprinted Anderson material is 29 episodes from 2000 AD that ran between 1997 and 1999 (mostly drawn by Steve Sampson), plus the recent "Algol" sequence; the Megazine serial "Something Wicked" from 1995; 32 episodes that appeared in the Megazine between 2004 and 2007; and the 2011 Megazine serial "The Trip."

Next week: we retrace our steps a bit for the new American collection Inferno, which also includes that story's lead-in, "Purgatory," and a few extra pieces.
Posted by Douglas Wolk at 11:00 PM