Another anomaly within the Dredd-verse reprint catalogue: the only volume devoted to a place, specifically Hondo City. The core of it, as with the earlier Shimura, is the four brief episodes written by Robbie Morrison and drawn by Frank Quitely, published in 1993 and 1996--Quitely's cover from "Babes with Big Bazookas" is reused as the cover here. This one, though, opens with "Our Man in Hondo," the 1989 Dredd sequence that introduced the city. (It's got a clever John Wagner plot and some nice design work from Colin MacNeil--and also featured the splendid Brendan McCarthy cover below--but captions like "Judge Dredd succeed in destroying Mega-City agent robot who killing Nip-Cit bigwigs. But honourable Judge Inspector Sadu, he far from satisfied..." make it tough to read in 2012.) 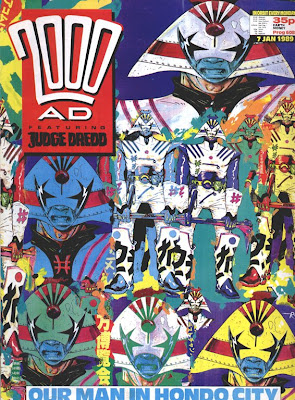 Designing a futuristic Japan for comics has to be a challenge, because so much of Japan is at the edge of the possibilities of design already. (Legion of Super-Heroes, for instance, always seems to look like the Tokyo of 20 years after any given issue's publication date... and it's set 1000 years in the future!) So I occasionally think that the idea that post-nuclear Hondo has kinda-sorta gone back to the model of feudal Japan is a bit of a cop-out. The best example of extrapolated futurism in these Shimura/Inaba stories' art is Quitely's mall in "Babes with Big Bazookas" (and even that looks a little bit contemporary, 16 years after its publication)--but I always find myself wanting to know more about the relationship between the culture of Hondo City and the present culture of Japan.

After the Quitely episodes, this volume leapfrogs past the rest of the material reprinted in Shimura to the 2004-vintage "Executioner" and "Deus X" serials, and then to 2010's "Hondo City Justice." The first two are both drawn by Andy Clarke, who's a very effective artist when he's got a story he can really dig into, or a scene that something just this side of "realism" can make extra-uncanny--the opening sequence of "Deus X," with the suicide bomber shredding everyone on the train with those planar discs, is exactly his forte. (My favorite thing Clarke's drawn is probably Thirteen, in part because as that story cranks up its scale, his style connects even the craziest sequences to the small-scale beginning.) 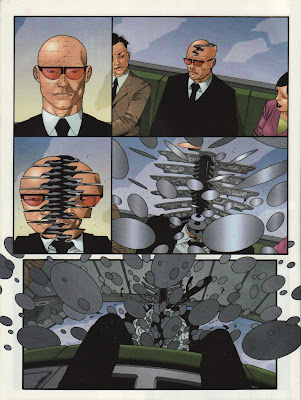 There are lots of other set pieces in "Deus X" that let Clarke show off: the showdown at Senso-ji, Shimura's "the art's in knowing when not to move" moment, the smashing-through-the-window bit. (And, in its way, the shower scene near the end, although that one made me feel like I'd suddenly switched to reading an adaptation of "Shimura: the B-Movie.")

"Executioner," though, is more of a stretch as a story. Dredd flying around the world to farm out an extra-judicial execution to someone else isn't entirely in line with how we usually see him (although Robbie Morrison makes a decent case for it); Sesoku and Inaba training by fighting robots with light-sabers is the equivalent of those X-Men stories where somebody realizes that there hasn't been a fight scene in a while so we get a Danger Room sequence; Sesoku turning out to be a thoroughgoing creep in every possible way makes the story's resolution less satisfying, because Shimura's not doing anything morally complicated by executing him, just making his own life more difficult. 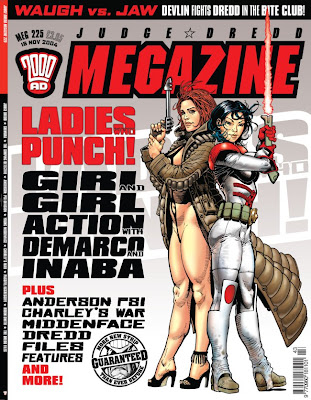 "Hondo City Justice" introduces another new artist to the (retitled) series, Neil Googe, whose habit of filling every bit of space on the page with panels whose borders don't include a lot of right angles works in the context of a story in this setting in a way that it might not in another--this is one of those wall-to-wall-action stories that 2000 AD and the Megazine seem to specialize in but don't often actually do in such a concentrated way. The protagonist gets thrown out a window on the first page; a page involving characters observing cherry blossoms (which still has seven panels on it) is immediately followed by several with detached body parts flying everywhere.

Maybe as a consequence, it's more a chain of chaotic events than a focused plot. (This is also the second story in this volume whose villain explains his evil scheme to Inaba while she's chained up.) Giving Inaba a protégée of her own--since she's now pretty much taken over the series from Shimura--is a fun idea, and so is having that protégée be a bloodthirsty psychic Magical Girl type, and the eyeball-robot monster is an attractively weird piece of design. But Morrison still doesn't offer much of a sense of what drives Inaba, other than being a solid cop, and the story doesn't have as much of an anchor as it deserves. The second episode did, however, feature the spectacular Quitely cover below. 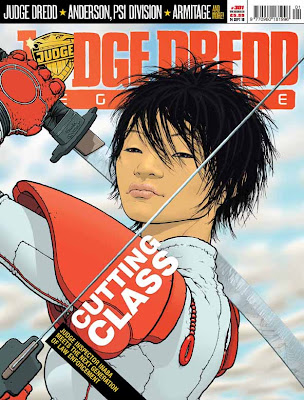 For the record, the still-unreprinted Shimura and/or Inaba stories are "Heavy Metal," from #2.75; the Dredd story (guest-starring Inaba) "Warriors," from #3.31-3.33; "Scary Monsters," from #3.35; "The Harder They Come," from #238-243, drawn by Colin MacNeil in black and white (which might have looked odd in this volume, although I'd still have liked to see it here); "Sumos and Sporrans," from Judge Dredd Mega Special 1994; and "Angels of Death," from Judge Dredd Mega Special 1996. (Plus, of course, the recent Megazine serial.)

Next week: we circle back around to material we've sorta-kinda-except-not-entirely covered before, with The Batman/Judge Dredd Collection.
Posted by Douglas Wolk at 11:00 PM