A confession up front: I haven't actually seen this book yet--it's out in the U.K., but not yet in the U.S. But! I do have the original issues it draws from. So if the listing on the official Web site is off, I'm writing about the wrong thing this week, and I beg your forgiveness.

In any case, this is the volume that almost-but-not-quite wraps up Alan Grant's '90s run on Anderson Psi Division. Grant apparently lost some enthusiasm for writing the series after "Crusade"; there were a smattering of short stories after that, as well as the six-part "Horror Story," and then he tabled the character for four or five years, aside from 2001's "R*Evolution." (By the time Anderson Psi Division returned in the Megazine, John Wagner had put Cass into another of her many comas.) But that's one of the glories of the British anthology model: there doesn't have to be a new Anderson story every week or month to keep the franchise alive, it just comes back when it's ready to come back. 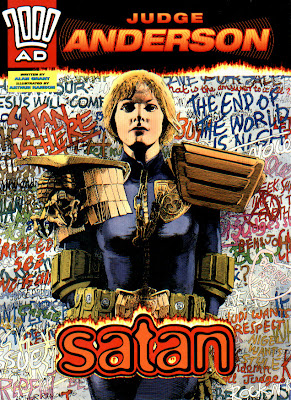 Since this period of Anderson is all about broad statements, here's a broad statement about it: I rarely love the particular ways that Grant engages with enormous issues of philosophy and religion and human experience here--but I do very much like that he decided that this series about a nebulously psychic, distinctly callipygian future cop was going to be his vehicle to engage with those issues, damn it all, and I totally love the way that he makes these stories vehicles for artists to engage with them.

Arthur Ranson's color Anderson stories--especially "Shamballa" and (this volume's) "Satan"--are the most gorgeous stuff I've ever seen by him. (I recommend having a look at the Anderson page on Ranson's site. I like his notes on the earlier Satan collection's cover, above, that "some of the graffiti is personal," and on the two-page spread of Cass in space: "smug having done this without use of white paint.") And Steve Sampson was drawing a significant amount of material for 2000 AD and the Megazine around this point, but his Anderson pages are by far the best--the most eye-lingering, the most elegantly composed. (The only Anderson cover he drew during this period is below; don't know about that facial expression...) Too bad Angel Unzueta doesn't acquit himself quite as well on the one-off throwaway "Danse Macabre," whose opening image is an Escher-girl Anderson with lens flare (or pinpoint lasers?) on both buttocks. Lens flare was big in those days.) 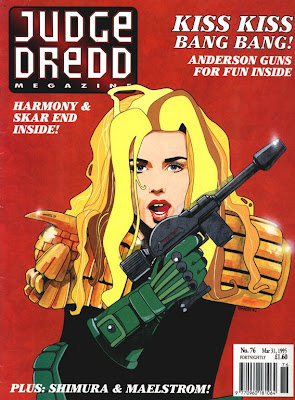 This volume begins with another obligatory Anderson ass shot, at the start of "Something Wicked"--a previously unreprinted story whose art is half really nice-looking (the Sampson-drawn half), half not-quite-there great-grandson-of-Bisley. It's a setup for "Satan," which picks up immediately after its ending--but couldn't run just then, because Vol. 2 of Judge Dredd Megazine only had three issues left to go at that point. An interesting point of comparison: when Grant writes about trepanation, we get the killer in the second chapter here, with the psychedelic tornado of demons shooting out of his psyche on its final page; when Wagner writes about it, more or less, we get the Branch Moronians. Grant's also got an unshakeable habit of punningly naming characters after significant mystical-literary figures or ideas: in "Something Wicked," we have Adam Kadman, who's not very effortfully disguised from Adam Kadmon.

The back of the book is, as with the first two volumes, "restricted files"-type Anderson stories, and that section is still catching up with the main sequence, although I think there are only a few stories from early-'90s Judge Dredd Yearbooks and a Judge Dredd Mega Special left to reprint--"Dear Diary" and "Colin Wilson Block" are old enough that they happen before Corey's suicide! The latter appeared in the 2000 AD Winter Special 1988, an odd, banged-together thing with some color material, some black-and-white material, a Zenith story drawn by one M. Carmona (who?), etc. 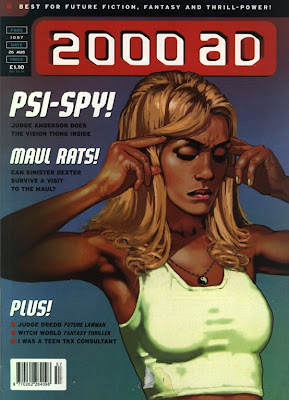 And "Colin Wilson" is generally a what's up with that?" story. The "alien mind-parasites" bit is a nod to real-world author Colin Wilson's novel The Mind Parasites, and it seems to be getting into position to be an "Anderson vs. Cthulhuesque psychic demon" story, when all of a sudden, it just--stops: Anderson (after waking up in her bed with her little Judge cuddly toy) concludes that the entity sacrificed itself for something nefarious to do with children, and rides off, the end. What? Was this supposed to be the beginning of a longer story that got called off for whatever reason? Anyone know?

But children-and-trauma is, inescapably, a recurring theme in Alan Grant's Anderson stories--it's the core of the 17-episode "Wonderwall"/"Crusade" sequence from 1997 that began the feature's return to 2000 AD, almost a year and a half after it left the Megazine. (Specifically, it returned with the cover of Prog 1045, below, and its obligatory Anderson ass shot.) A quote from Grant in 2002: " I think the only story I'd consign to oblivion would be the ANDERSON tale 'Crusade'. I thought Steve Sampson made a valiant effort with the artwork, but in the end the story sank under the sheer weight of children (and not very good writing)." In the same interview, he cites "Satan" as being among his best work, on the strength of Ranson's artwork. 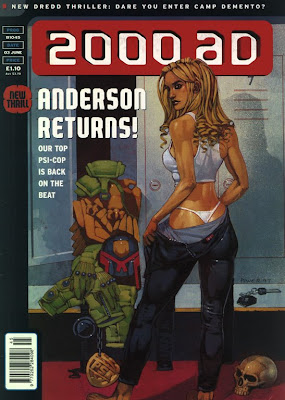 I'm not especially fond of "Crusade" as a story, although I do like its dreamlike tone, and I'm not the first to observe that it's one of the biggest things that's ever happened in Mega-City One that's had absolutely no follow-up. But I wouldn't consign it to oblivion either, because, again, it's a shining example of something Grant does terrifically well: figure out what artists can draw beautifully and build a script around that. Considered as the Steve Sampson Show, it's gorgeous--those full-page and two-page shots of the Cursed Earth landscape built around simple color palettes! those repeated panels that are more powerful than changing their image could have been! those photo-modeled head shots finessed into a few psychedelic lines!

It's even got a significantly different look-and-feel from "Wonderwall," the Sampson-drawn story immediately before it. The art saves this one from collapsing under the weight of the series' tics: the Children Good! Child Abusers Bad! gavel-pounding (back when I looked at Shamballa, I compared Satan denying responsibility to something out of Ditko, and Deeter Malthus' attempt at self-defense also reads like what a villain in a Mr. A comic would say), the forced wordplay (clearly it's a case of title preceding story), the rundown of what Grant had been reading lately (at one point he just slaps in a quote from Andrew Vachss), the straw-man role of Judge Goon, and the general doing-of-the-obvious: if I never see Alice in Wonderland used as an image of the fragility of childhood innocence again, it'll be too soon. 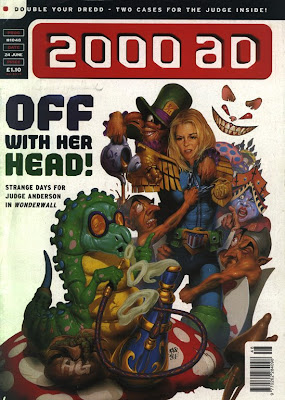 Of the shorter pieces here, I'm partial to "Witch," mostly because I grin at the thought of a retirement home for Psi-Judges nicknamed "Dunthinkin." (Points off for severe historical inaccuracy, though: there was not a "Lizbet Anderson" involved in any way in the Salem witch trials, as far as I can tell, and the accused witches were hanged rather than burned.) "Lawless," as I noted in the context of The Psychic Crime Files, is effectively Anderson encountering Grant's terrific creation Anarky; "The Great Debate" is less an Anderson story than a Dredd one-shot with Anderson subbed in for him, and less either of those than a Monty Python skit.

A bibliographical quirk: Grant and Mick Austin's "Confessions of a She-Devil" appeared in 2000 AD Annual 1990, two years after the Annual included the Grant-co-written Dredd story "She-Devils." That '88 volume also features Peter Milligan and "Eddy Cant"'s Anderson prose story "Dear Diary"--the latter doesn't seem to have ever drawn anything else, and the kid's-scribble illustrations suggest that it's a pseudonym for somebody. Milligan himself? Anyone know? "Dear Diary," incidentally, reappeared a bit over a year ago (sans illustrations), alongside this volume's "Exorcise Duty," in the digital-only prose collection Sweet Justice: Selected Short Stories from the 2000 AD and Judge Dredd Annuals 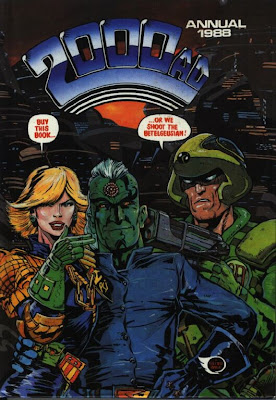 It's pretty easy to imagine a Psi Files Volume 04 that would wrap up the late-'90s 2000 AD stories with "Horror Story" and "Semper Vi," re-reprint "R*Evolution," then jump to Cass's return in the Megazine in 2004 with "Half-Life," "WMD," "Lock-In," "City of Dead" and "Lucid"--that'd be 294 pages right there, with some more first-rate artwork. Crossing my fingers.

Next up, the final review in our weekly series: Tour of Duty: Mega-City Justice. See you here.
Posted by Douglas Wolk at 11:00 PM