Mean Machine is the one-notiest of one-note characters, and a lot of the stories involving him have a nearly identical arc: 1) Can he be reformed? 2) Nope. (Bok!) So a lot of this volume is rather samey, if entertaining; I can't imagine there was a broad outcry for a Mean retrospective, but as someone who's immersed in this stuff I'm happy to see it. 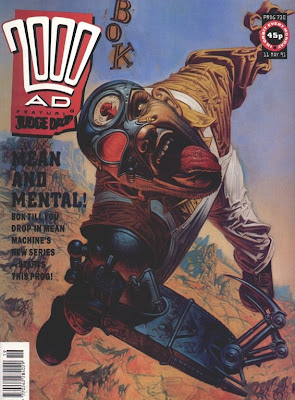 "Travels With Muh Shrink" (the title has to be a play on Graham Greene's Travels With My Aunt) appeared beginning in May, 1991; it was the first that had been seen of the character since "A Merry Tale of the Christmas Angel," more than five years earlier. Who knows why John Wagner decided to turn his attention back to Mean? Maybe this serial was meant as a way of getting him back on stage before the long-in-the-works "Judgement on Gotham"; maybe it was planned as a feature for the Megazine at some point; maybe it was Wagner keeping his hand in the Dredd universe while Garth Ennis was ramping up to speed. It's not one of Wagner's more successful comedies, because it doesn't build like those do--it's more or less just one gag after another. Which reminds me: is the bit about the Reliant Robin and the Snoopy sweatshirts a jab at a particular person, or just a type?

The real curiosity here is artist Richard Dolan, who only ever drew this series and a few covers for 2000 AD; he's both a real talent and a significant mismatch to the material. Both Carlos Ezquerra and Ron Smith got the comedic possibilities of Mean--a half-man, half-robot who talks like Yosemite Sam, headbutts everything, and just barely operates on the same plane as everyone else around him. What Dolan's got to offer is the kind of painterly, look-at-my-brush-textures realism that was very popular in that era, in the post-Frazetta mode of Simon Bisley and Glenn Fabry; his characters are clearly modeled, for the most part, on photos. 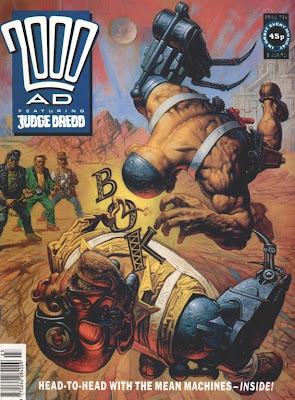 That approach is fine for certain kinds of action comics, but it doesn't work terribly well for funny stuff. So Dolan models a bunch of his characters on photos of the Three Stooges--which might have been funnier if Brian Bolland hadn't already used the same trick way back in "The Face-Change Crimes." It also means that Prof. Dingbert always looks like Curly Howard, which yanks me straight out of the story every time. More subtly, he's always occupying a different physical space from Mean--even when they're on panel together, they don't quite belong in the same place. And the larger-than-life slapstick bits ("Butted him clean through to th' next page!") don't get over on cartoon logic like they're supposed to, because Dolan's art keeps trying to ground everything in real-world physics. 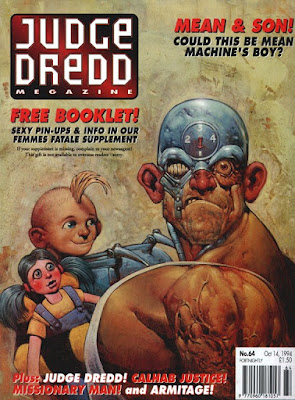 There's also the problem of muddy reproduction, which curses a lot of the painted comics of this era of 2000 AD, especially when they're shrunk down to modern paperback size. (That's one thing I love about the original comics: they're big, which often makes them more readable.) Carl Critchlow's painted art on "Son of Mean" reproduces a lot better--it's still a little fuzzy around the edges, and murky in places, but he tends to set his characters against brightly colored or white backgrounds, or at least give a lot of panels some breathing room and visual contrasts. (And why does Greg Staples get cover-billed for his 9 pages rather than Critchlow for his 60?)

"Son of Mean" is a much funnier story than "Travels," mostly because it does build up to Junior's transformation, but the painted/every-wrinkle-indicated technique is odd here too: this is effectively a cross between several Looney Tunes staples, a Sylvester-and-Sylvester-Jr. cartoon with the elder cat replaced by Yosemite Sam (and the business with Junior and his doll is a little like the "and I will name him George" bit from "Hoppy Go Lucky"). The "let's run through all the possible crimes alphabetically" routine is straight Chuck Jones territory. (I laughed at the "arsin' about" joke, although it's a rare example of a Britishism in the mouth of this very American character.) Critchlow recognizes that Mean is a caricature, and so's his (never named!) son; the gag on the second page with Mean holding exactly the same scowl for seven straight panels wouldn't be funny if he looked more ordinarily ill-tempered the way he does in Dolan's artwork. 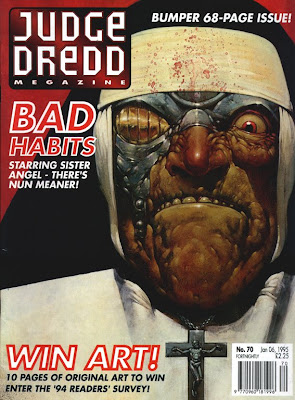 Critchlow's design for the kid is over-the-top moppetry, with neotenic features and that little sprig of hair. It's effective as comedy, although it's a stretch to fit into the "real timeline" feature of the Dredd universe: Mean's son is clearly written and drawn as being about seven or eight years old. One bit of dialogue says he's roughly 13, which is the youngest he could possibly be, given that he was conceived before "The Judge Child" and this story ran in 1994. (Seven-Pound Sadie and the shotgun wedding appeared in Alan Grant and Robin Smith's Mean Machine story in the Judge Dredd Annual of 1983; Grant and Smith had also done a Mean Machine piece in the previous year's Annual. Wouldn't it have been fun to see those here instead of another reprint of "Merry Tale of the Christmas Angel"?) Mean Jr. does turn up again in a panel or two of "Fifty-Year Man" in 2007, clearly an adult but too far in the background to estimate his age clearly. 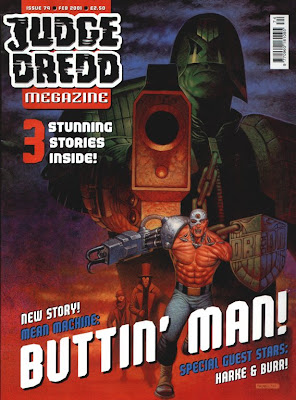 I don't quite know what to make of the two black-and-white Gordon Rennie stories in here, especially "The Geek" (cover pictured above, with a caption that puns on Wagner and Arthur Ranson's "Button Man" series)--Harke & Burr appeared in a bunch of mid-'90s Judge Dredd Megazine stories I haven't read--but I'll note that it's a little odd to see Mean saying "bastich" in the first of them. Doesn't that word belong to Lobo? (On reflection, I think Alan Grant used it in a Dredd story at some point, too.)

"Angel Heart," though: that's a tougher one, just because Wagner starts out setting it up as the standard Mean Machine comedy--1) Can he be reformed by the power of love? 2) Nope. (Bok!)--and ultimately tugs it toward tragedy. Porsha Wuss's name suggests that she's a parody of some celebrity or other (anyone know who it might be?), and the setup of the story indicates that we're supposed to think she's a patsy for thinking of Mean as a tragic figure, corrupted by his father and a slave to violence. But that's what he is, it turns out, and this story was effectively Wagner's farewell to Mean. (I believe the only time he's written him since is a very brief coda in 2007's "Fifty-Year Man," in which Mean is playing the Lennie role to Mean Jr.'s George.) 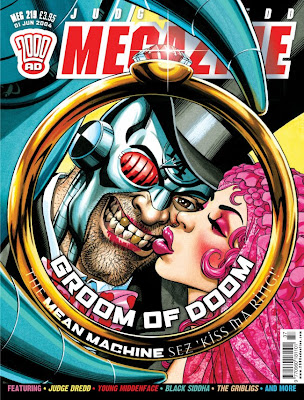 David Millgate's interpretation of Mean seems a little off, and not just because he's got the "1" on his dial at the 9:00 position rather than the 6:00 position where everyone else draws it. Most of "Angel Heart" is a very broad comedy (is Cyberfreak supposed to be a parody of generic early Image Comics cyborgs?), and Millgate plays it in a kind of post-Tank Girl style, with sharply angled chunky lines and little fourth-wall-breaking sight gags all over. The visual problem is sort of the opposite of "Travels With Muh Shrink": Millgate's artwork here isn't nearly grounded enough in a recognizable world--the wackiness of Mean's outsize gestures and presence don't contrast with anything, it's all pitched up all the way--and when the comedy peels away in the final chapter, it struggles to get the tonal shift across.

Bibliographic notes: believe it or not, this isn't anywhere near the whole Mean Machine solo canon. Besides the aforementioned Alan Grant/Robin Smith stories in the early Judge Dredd Annuals, there are other Wagner-written stories in a Poster Prog (with some nice Cliff Robinson art) and Megazine 2.82, and Gordon Rennie-written stories in 2000 AD Sci-Fi Special 1995 and 1996, Judge Dredd Mega Special 1996, and four other issues of the Megazine.

Next week, we turn our attention briefly to Young Death: Portrait of a Superfiend. But wait--didn't we cover that already a few weeks ago as part of Judge Death: The Life and Death of...? Well, almost. You'll see.
Posted by Douglas Wolk at 11:00 PM