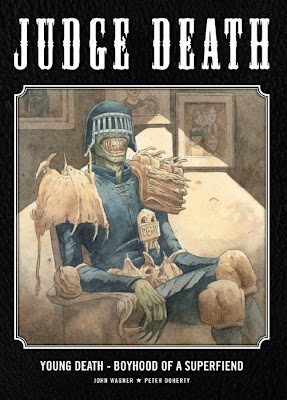 Yes, we've covered this book before--mostly. "Young Death" was indeed reprinted in Judge Death: The Life and Death Of..., which David Brothers and I discussed in November. But the British edition of Young Death includes one bonus story: "Masque of the Judge, Death," a ten-page black-and-white number by Si Spencer and John McCrea (set during "Necropolis") that first appeared in the Judge Dredd Mega Special 1991, published roughly at the same time as 2000 AD Prog 733. (It was also reprinted in 1999's Best of Judge Dredd Special Edition, an odds-and-ends collection of mostly mid-'90s material.)

As its title suggests, its plot is lifted fairly directly from Edgar Allan Poe's "Masque of the Red Death," and so is a lot of its language, although substituting pop-culture and Dredd-continuity references for Poe's descriptions doesn't help them much. "The prince had provided all the appliances of pleasure. There were buffoons, there were improvisatori, there were ballet-dancers, there were musicians, there was Beauty, there was wine," goes the original; Spencer turns that into "There was tobacco, there was Umpty Candy, there was sugar..." For the benefit of younger folks reading this blog, the "you're bending my cantaloupe" bit is a reference to this 1990 Happy Mondays hit, a cover of this John Kongos song from 1971. 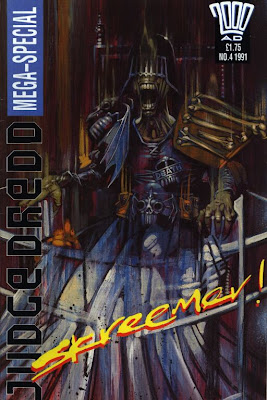 The notable thing about "Masque" is John McCrea's super-high-contrast black-and-white artwork--some of the most heavily stylized art that had yet been seen in any Dredd-related story, and also a real outlier in McCrea's published work, at least the parts of it I've seen. (It doesn't even look much like the "Chopper" serial he'd published a bit earlier.) That particular Mega Special had a lot of visuals that pushed at the edges of what was permissible for the franchise: it also included Glynn Dillon's curious "Cult of the Thugee" and Shaky Kane's "Judge Planet." Dean Ormston, who's credited with the idea for "Masque," drew the image of Judge Death on its cover. Why does it say "Skreemer," the title of a Peter Milligan/Brett Ewins/Steve Dillon miniseries DC had published a couple of years earlier? Beats me!

"Masque," though, looks unusual even in that context. Dredd had never had much in the way of freehand panel borders (aside from the very different way Carlos Ezquerra used them), but McCrea's slabs of black nearly look like they're cut out of construction paper with an unruled X-Acto blade. I love the way he uses light and space throughout the story, and wish (a little) that he'd continued to do more art in this vein, as opposed to the more streamlined, straight-ahead style he developed for The Demon and Hitman a few years later. See, for instance, on the page below, the way Prospero's scroll in panel 3 does the old "sticking out of the panel border" trick via negative space, or the feathering on "Tweak"'s costume--an effect to be seen nowhere else on the page or in the story--whose shift to straighter contours just below its head makes it clear that it's a person in a Tweak outfit. 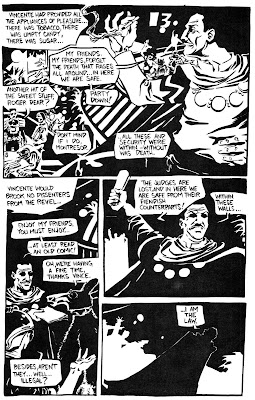 It's hard to imagine a story that looked like "Masque" having run in 2000 AD, or any of its spinoffs, even a couple of years before this. The late Fleetway/Maxwell period of the series seems to have been even more open to stylistic experimentation than usual: see also Steve Sampson's work on "Brit-Cit Babes" and Roger Langridge's "The Straitjacket Fits." And McCrea's work here would have probably looked "off-model" if it had been an actual Judge Dredd story, but for a piece like this that's more about mood than continuity, it's wonderful.

Next week, it's back to the Complete Case Files (after seven weeks away!) with Vol. 16, in which John Wagner puts in a couple of brief appearances before leaving the weekly series in Garth Ennis's hands, and over in the Megazine Alan Grant introduces Raptaur and Psi-Judge Karyn.
Posted by Douglas Wolk at 11:00 PM