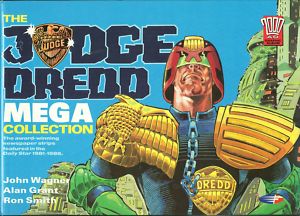 (Reprints: Judge Dredd weekly strips from the Daily Star, Sep. 5, 1981-Dec. 14, 1985, with some omissions)
A little history, pieced together from the invaluable Barney: The weekly Judge Dredd strip, written by John Wagner and Alan Grant and initially drawn by Ron Smith, launched in the British tabloid newspaper Daily Star on August 29, 1981. (For historical reference, that would've been the same cover date as Prog 227, smack in the middle of "Judge Death Lives." The first, never-reprinted strip is called "Devil's Island," which makes me suspect it was a reworking of the story in 2000 AD Prog 2. Anybody got a scan of it I could see?) Smith drew it from the beginning until August 1986, when Ian Gibson took over; the weekly strip ran until the end of 1986. Barney claims that Wagner and Grant wrote it together for its entire run, but the later strips in this volume are just credited to "John Wagner and Ron Smith."
Judge Dredd was also a daily continuity strip in the Daily Star from the beginning of 1986 until May 1998; that one was initially written by Wagner and Grant and drawn by Smith too, but Gibson took over drawing it in mid-1986 and drew it until September 1987 (and intermittently thereafter). Subsequent Wagner/Grant storylines were drawn by Barry Kitson, Steve Dillon and Mike Collins. Wagner and Grant left the strip in March, 1991, around the time the Megazine must have started demanding a lot more attention; for its final seven years, the Daily Star daily was variously written by Mark Millar, Alan McKenzie, Gordon Rennie and Andy Diggle, and drawn by Collins, Carlos Pino, Smith again, Sean Phillips, Dylan Teague, David Bircham, Charlie Adlard and Andrew Currie.
Various weekly strips and daily continuity sequences have been reprinted in scattered Dredd and 2000 AD specials, as well as a few issues of the Megazine and 2000 AD itself, but none of them are currently in print, and the great bulk of the Daily Star strips have never been reprinted. (I gather from the 2000 AD message board that the publishers would like to see them all collected eventually, but it isn't likely to happen soon.) The better part of Smith's weekly strips--but not by any means all--are collected in this 1990 volume, a Fleetway hardcover with U.K. and U.S. prices listed. If you'd like to see what they were like, there's a pretty good one reprinted here.
The weekly Daily Star Dredd is a very peculiar strip, partly because Wagner and Grant almost always tried to fit an entire story, with a punch line at the end, into nine or ten panels; that has the odd effect of tipping the thrilling/satirical balance of Dredd to straight-up comedy. Smith draws it in a slightly wackier variation of the style he used for 2000 AD--there's a hint of Mort Drucker about it sometimes--with a lot of faces that I'm guessing were based on British celebs of the time. (I only get a few of them, like the tantrum-throwing "target ball" player who's clearly drawn as John McEnroe.)
A few times, there's a multi-episode story, but never more than four episodes, each of which ends with its own gag. Occasionally (but not often), they'd rewrite a Dredd story that had already appeared in 2000 AD as a single strip, as with that "Apocalypse War" episode I mentioned last week. (It's followed by a series of post-"Apocalypse" strips, including one in which Sector 403--blown up in both "Pirates of the Black Atlantic" and "The Apocalypse War"--gets nuked a third time. "Oh, well, back to the drawing board," goes the dialogue in the final panel.)
And sometimes the newspaper strip riffed off the comic in subtler, satisfying ways. There's one strip I cracked up at twice, called "Alphabet Killer": somebody's murdered Aaron B. Aardvark, Abigail Aardvark, Abner Aardvark and Ace K. Aardvark. (Dredd shoots the killer before he can get to Adolf Aardvark.) I won't spoil the actual punch line, but the extra joke is that it's Aaron B. Aardvark because Aaron A. Aardvark was first on Judge Cal's death list. There's also a 1985-era strip involving "sky surfing" that predates "Midnight Surfer" by a few months: maybe it gave Wagner and Grant ideas.
In general, it's pretty amazing how much worldbuilding Wagner and Grant were able to squeeze into every strip--it was effectively a weekly advertisement for 2000 AD (the final tier almost always ended with a plug for the comic, replaced here by a head-shot of Dredd), for an audience that didn't read it already. That meant that a lot of initial captions had to mention that this was happening in the 22nd century, but also that more generally a lot of real estate every week had to be devoted to explaining the idea that "this is a science fiction comedy involving the crazy residents of a gigantic future city who run afoul of a badass, grim-faced supercop."
So everything else had to be squeezed into relatively little space: the plots get straight to the point, and Smith had to draw a lot of very complicated, very tiny images. A panel in one strip I just opened to at random, for instance, involves Dredd sternly addressing a crowd of chastened-looking bald people while, in the background, enormous flying vacuum cleaners suck up a thick coating of shaving cream that's covering a group of buildings in the MC1 landscape. That is a lot to ask somebody to draw into a 3-inch-by-2-inch panel that's a twelfth the size of the strip, and somehow Smith pulls it off.
These strips do have a lot of charm--the maximum-story-in-minimum-space effect is impressive, and Wagner and Grant pull off a lot of hit-and-run gags ("Kentucky Fried Algae," various apropos block names, favorite words like "winkling"). For the most part, though, they read like what they basically were: clever weekly ads for the real thing, a hint of a few aspects of what Dredd's creative team could do, rather than a full-fledged example of it.

A small commercial announcement: I've written a new Kindle Single that's up over at Amazon (yes, you can apparently buy it in the U.K., too)--Comic-Con Strikes Again!

, an essay about Comic-Con International San Diego and what happens when fan culture meets marketing money. Readers of this blog might enjoy it.
Next week: back to the Case Files beat, with Volume 6, featuring one of my all-time favorite short Dredd stories (anyone want to guess which one?), as well as "Destiny's Angels" and "Starborn Thing." Also, it features rather a remarkable number of episodes drawn by Ron Smith, considering how much time the Daily Star strip must have been taking him to draw.
Posted by Douglas Wolk at 11:00 PM