We're getting toward the end of Garth Ennis's initial run on Judge Dredd--when Case Files 19 comes out, it'll only include eight of his episodes--and since that's not due out for a few months yet, this week we're veering to one of two different books that have reprinted Prog 830's "Enter Jonni Kiss." (The other one is Hamlyn's Babes in Arms, a collection of material drawn by Greg Staples; this one gets the nod for also including the otherwise unreprinted "Goodnight Kiss.") 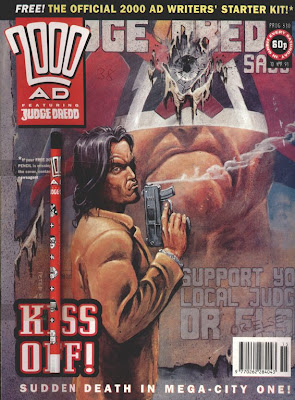 Around 2001, Titan (which had earlier been the main source for 2000 AD book-format reprints, then gave way to Hamlyn for a few years) went back to publishing a handful of Dredd books. Ennis was already a big name by that point, thanks to the success of Preacher--which was reprinted in the Megazine--and Hitman, among other projects. So one of Titan's initiatives was reprinting the better part of Ennis's Dredd run (and some other material from around that time) in a series of uniform oversized paperbacks, including this one, arranged thematically.

What the 2001-2003 Titan books, as well as Hamlyn books before them, have going for them is that they're big, and have really nice paper and reproduction. (They tend to be relatively slim, though.) And as awesome as it is to have many more old 2000 AD stories affordably in print than ever before thanks to Rebellion's reprint program, not to mention sensibly complete packages of work--I wouldn't trade it!--there's nothing like the immersive buzz of seeing visually lush comics like these at the size at which they were intended to be read. Sean Phillips' artwork on "The Marshal," for instance, has vastly more impact here than in the Case Files book covered here a couple of weeks ago--the slathered-on brushstrokes on the backgrounds make the figures pop out. That's actually something that bugs me a bit about the new digest-sized black-and-white reprints of early Dredd stuff: it's great that there's an entry-level Cursed Earth book for people who don't want to make the long, trying trek through the first few Case Files, but it's artwork that was drawn with a certain physical dimension in mind, and losing that diminishes its (thrill-)power. 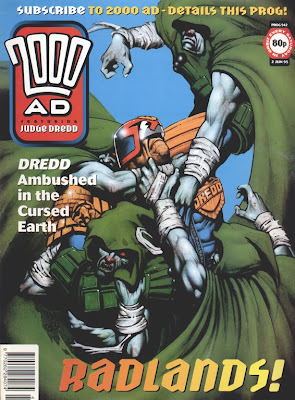 As for the contents of Goodnight Kiss itself: Arguably the only long-term subplot for which Ennis planted seeds during his Dredd run was the Marshal business, concerning a Cursed Earth tribe with a Lone Ranger fixation that's out for revenge on Mega-City One--and, as far as I know, he was the only person to follow it up. All three of the relevant stories appear here.

"Enter Jonni Kiss" is a peculiar seven-page scrap of a story, the kind of setup-without-follow-through that the Judge Dredd feature hadn't seen since PJ Maybe's first appearance in "Bug"; its only real attractions are Greg Staples doing his best Simon Bisley impression, and Ennis giving the Sovs names straight out of Asterix ("Markimarkov"? Yikes). Consider its timing, though. "Enter" appeared in Prog 830, by which point the clock was ticking for the Summer Offensive (which began with Prog 842) and the Grant Morrison/Mark Millar team's takeover of Dredd. It seems possible that "Goodnight Kiss" was supposed to be a ten-part story, and (as its title suggests) Ennis's farewell to the series.

It certainly seems to be wrapping things up in some ways. Ennis hadn't yet written a full-on Cursed Earth story (the beginning of "Judgement Day" barely counts), and that was the one big piece of Dredd world-building he hadn't gotten to play with. Dredd's hallucinations in the fourth chapter--Kraken, Giant, Dekker, Rico, Judge Death, the Dead Man--have the tone of a final-movement recapitulation (although Dekker's the only one who bit the dust on Ennis's watch). And the conclusion is one of the I-am-the-law moments Ennis occasionally permitted himself (see also "Twilight's Last Gleaming"). 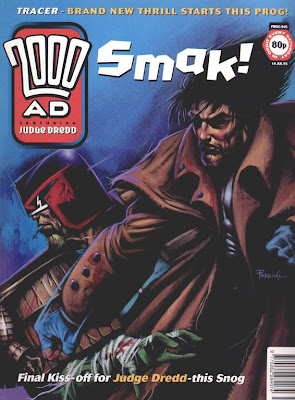 This was a sour note to go out on, though, a dull mood piece with distressingly heavy-handed Christian symbolism, dragged out well beyond its natural length. Jonni Kiss never gets to be anything but a badass assassin who's defeated in the end by Dredd being even more badass. (I do like that he gets his instructions on a fax machine with hole-punched paper edges.) Hoolihan is the story's resident redshirt; her death might have had some more dramatic impact if she'd been introduced before, but Ennis never really got around to adding anyone to the series' regular cast. Nick Percival's designs for the Brotherhood of Marshals look like barely reconstructed versions of the Spectre.

As it happens, the nine-part "Goodnight Kiss" didn't appear until two years after Ennis had otherwise left Dredd, and Thrill-Power Overload suggests that that's only because Nick Percival took a very long time to draw it. The scene with Chief Judge Volt at the beginning of "Goodnight Kiss" has to have been rewritten, and maybe redrawn, from one with McGruder in that role. In the meantime, Ennis's six-episode Dredd-universe spinoff "The Corps" appeared in Progs 918-923, and although it's not quite as bad as he suggests, he got so tired of it that he infamously subcontracted Si Spencer to write the final six-page episode for him.

Next week: a book so new it hasn't officially reached U.S. stores yet (although it's available in the U.K.), Judge Anderson: Psi Files vol. 2.
Posted by Douglas Wolk at 11:00 PM