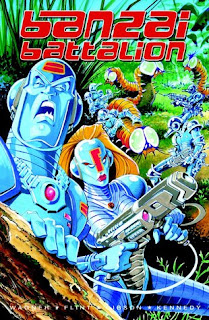 John Wagner is really good at deliberate self-parody--he doesn't do it very often, but when he does, he goes all-out. He also occasionally gets it into his head that some idea of his that seems slightly dodgy on the face of it is just unutterably funny, and returns to it over and over; sometimes he's right. (See: the Taxidermist, the Branch Moronians.)

Banzai Battalion is a fine example of both. It's a Dredd spinoff with a very limited premise, and it somehow outran a few that seemed more likely--Juliet November, say. But it also is a genuinely funny idea that improves slightly by being repeated a few times (not a lot of times): a parody of the kind of "over the top, boys!" war comics that Wagner used to write, with the twist being that the warriors are tiny, virtually helpless, incapable of being more than a mild nuisance to anything genuinely dangerous, and so blinkered by their orders that they can't do much good under ordinary circumstances anyway. (The title suggests that the concept might have started out as a Japanese-microtechnology joke--you didn't see a lot of British war-comic heroes yelling "banzai!"--but in any case writing them as stiff-upper-lip-by-jingo tommies is a much funnier idea.) 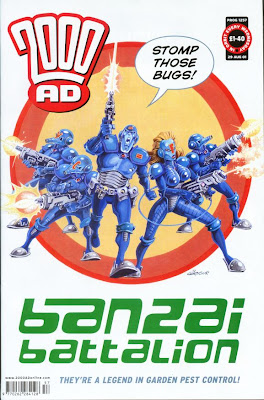 The limitations of the idea, though, are pretty obvious, starting with the fact that Captain Bug Stomper et al. can't really do anything outside of a garden setting. As of "The Fitz," when Wagner realizes that he's actually got a perfectly good garden in Mega-City One and a human supporting cast to go along with it, moving the Battalion over there seems like a good idea, but it's actually no less limiting. "The Fitz" and "Save the Fitz" have effectively the same plot: kindly old Mrs. Fitzenheimer's trust is betrayed; the Battalion expose the schemers and save the garden, in the latter case with the help of a cassette tape. A cassette tape. For someone as good at imagining future tech as Wagner usually is, that's not too impressive.

A lot of the jokes here get over on the strength of the artwork, though. Wagner and Gibson are a reliable comedy team (speaking of which, isn't it about time somebody reprinted "I Was a Teenage Tax Consultant"?), and although Gibson's drawing in more of his high-speed mode here, he does funny robots like nobody's business. Henry Flint and Cam Kennedy's sequences are pretty amusing, too, and even Cliff Robinson gets in on the action: the cover of the issue with the final chapter of "No Man's Land" has a standard "la placa rifa" image behind three of the Battalion--and the badge isn't there symbolically, but at actual scale. 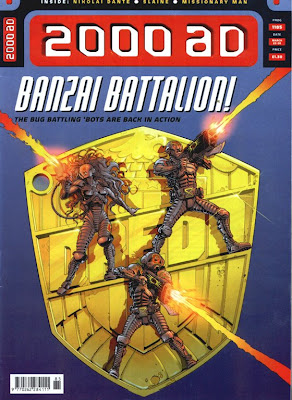 There are echoes of a few other familiar stories in "The Fitz," in particular--the opening sequence reminds me pretty strongly of the beginning of Grant Morrison and Frank Quitely's We3 (which came out several years later) and the supply-store scene is rather Toy Story 2-ish (which came out several years earlier), although I suspect that it's likely to be a coincidence in both cases. But there are also a handful of wonderful Wagnerian touches in this volume: I love the no-nonsense sleaziness of Bug Stomper and Flambo's relationship, the Gilbert Shelton nod of "Fat Freddy" Skatt, the bloodthirsty bagpipe-playing robot (too bad Wagner didn't come up with that joke for Cam Kennedy to draw...), and especially the black comedy of the kindly old couple from the first story turning up again as desiccated corpses in "No Man's Land."

The implication is that they'd been killed during the "second Robot War" 30 weeks or so earlier--although Wagner might not have meant for quite that much time to pass. Having written Dredd in 2000 AD  every week from #1031 to #1169 (aside from the Dredd-free #1100 and #1138), he turned it over to his old co-writer Alan Grant for all but three of the episodes from #1170 to #1182. Incidentally, it's not listed in BARNEY, but a letter column indicates that Grant had actually co-written one last Dredd story with Wagner: "In the Year 2120," the issue-length story in Prog 1077, wrapping up plot threads from the Judge Child sequence that had begun their collaboration. 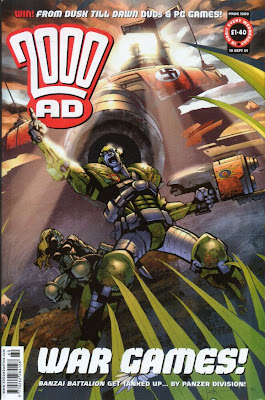 Speaking of the the war in question: there's actually one more six-episode Banzai Battalion serial, "Robot Wars," from Progs 1501-1506, which effectively put an end to the series, and isn't quite as much fun as the stories collected here. Can it have escaped Wagner's notice that he'd used the title "Robot Wars" already in the earliest days of Judge Dredd? Or did he figure that since a TV series had used the name too, it was fair game for another go-round?

In fact, next week we'll see Wagner's version of the "second Robot War" itself--sort of--as we head back into epicville with the first volume collecting the 2000 AD/Megazine crossover "The Doomsday Scenario," Doomsday for Mega-City One.
Posted by Douglas Wolk at 11:00 PM