The third and last (to date) Mega-City Masters collection is once again focused on artists rather than writers, and mostly on artists who have some kind of name recognition in the States. Which makes some sense, I guess--if you've got a Guy Davis piece in the archives, might as well use it, especially when it's as harsh and grotesquerie-oriented a character sketch as "Out Law." There are some exceptionally nice-looking stories in here, too--I can't argue with "Varks" for Kevin O'Neill (what an incredible cover, too!) or "The Island" for Frazer Irving (which I believe is one of his only two Dredd stories), and I don't know that Trevor Hairsine's ever drawn another Dredd story that looks as graceful as the one-joke "No More Jimmy Deans." 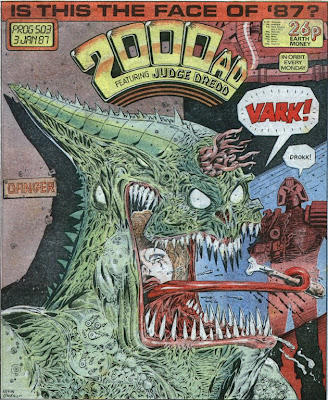 Still, these aren't necessarily the best or most visually striking examples of a lot of these artists' work. Mike McMahon's a terrific artist, but "Compulsory Purchase" is third-tier McMahon at best (I can see where "Howler" might be a difficult choice, but... "Voices Off"? "Shaggy's Big Shoot"?). And for all the spectacular Carlos Ezquerra-drawn Dredd stories there are, "Sturm und Dang" is a very strange choice, especially since it's in The Carlos Ezquerra Collection too. It's arguably an extra-Ezquerra-y story, since Koburn is a variation on his old Major Eazy, but it's also not the master at his best. (It's also strange to see Cam Kennedy represented by a pair of stories that are both in The Art of Kenny Who?)

"Dreams of Glory" is a sort of prequel to Batman/Judge Dredd: Die Laughing, which was also drawn by Jim Murray; I'm wondering at what point, exactly, John Wagner wrote it. It sets up that book's appearance of unlucky Deputy Chief Judge Paul Herriman, and it's nicely tailored for Murray's sense of caricature--the center of it is Herriman's Walter Mitty-ish fantasies of being heroic rather than competent. (The insignia of the Fems' Guild on the last page is a little much, though.)

As for the other new-to-this-survey material here: "Lobsang Rampage"--another Lobsang Rampa joke!--isn't great, but it's the only Andy Clarke-drawn episode that's not part of a longer arc (although it calls on the Nero Narcos stuff for context) and hadn't already been reprinted in Death Lives! "Safe Hands" is a nice-looking Jock piece with an "out-of-control robots" plot that we've seen too many times already. "Radstock" reads like a leftover Heavy Metal Dredd script by way of "The Hyper-Historic Headbang," and Karl Richardson's art just reminds me that I really like Gray Area. And then there's "PF"--well, it's unusual to see Arthur Ranson drawing a comedy piece, and maybe there are reasons for that. 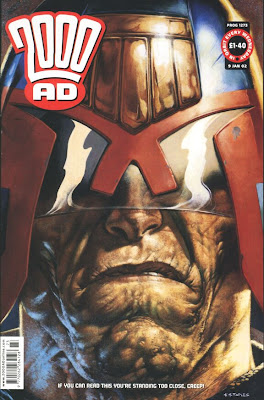 More generally--since from here on out "Dredd Reckoning" is almost entirely epics and spinoffs--it surprises me that Judge Dredd as a feature is still so heavily focused on six-page-or-so one-offs (the "Day of Chaos" year notwithstanding). That makes a lot of sense from a scheduling point of view, of course: when there have to be sixty-three new episodes a year without fail, and the timing has to work out for periodic relaunches, it's probably smart to have a lot of completed episodes that can be placed and rearranged with little difficulty. But there aren't even any other 2000 AD features that have anywhere near that many self-contained six-pagers--the only other comics feature I can think of that has a comparable hunger for short stories is Batman, and that only because of the weekly "Legends of the Dark Knight" digital-only feature (whose most recent sequence, incidentally, is drawn by none other than Trevor Hairsine). Wagner makes no secret of having burned out on them; not counting the four-pager from this year's Free Comic Book Day special, I don't think we've gotten an old-fashioned six-pages-and-out story from him since "Fat Fathers," just over two years ago.

Next week: the collection of Banzai Battalion, the peculiar tiny-gardening-robots series that spun out of Dredd.