Doomsday for Mega-City One 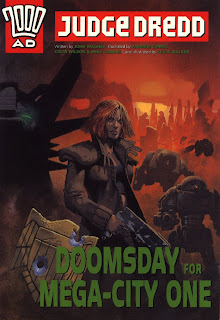 The 32-episode "Doomsday Scenario" sequence was the last time John Wagner (or anybody else) has tried to execute a large-scale crossover between 2000 AD and the Megazine. (There was later one very-small-scale crossover: Gordon Rennie and Carl Critchlow's two-episode "Burned Out.") The logistical difficulties, by this point, were even greater than they had been at the time of "Judgement Day" and "Wilderlands": since early 1996, the Megazine had gone monthly. So that meant 4 or 5 weekly six-page episodes had to run in parallel with each monthly 15-page episode, and on top of that, a vocal group of readers insisted that they had to be able to follow either series' thread plot without reading the other one. (Well, I'm guessing they mostly insisted they had to be able to follow the weekly without the monthly: I suspect the part of the Venn diagram that's Megazine readers who don't read 2000 AD has always been fairly small.)

Also, plot developments in either title couldn't spoil upcoming developments in the other. That's how "Doomsday" ended up split into two collections: this one, with the Megazine stories plus "Volt Face," from Prog 1167, which happens immediately after the final Megazine episode but was separated from the weekly serial by the two-part "Revenge of Trapper Hag"; and Doomsday for Dredd, with the main body of the 2000 AD serial. It'd have been nice to get lead-ins like "Gun Play" or "Worst of Frendz" or "The Contract" in there somewhere, but no such luck. At least the book spares us the fluorescent-orange fifth-color covers. But I won't! 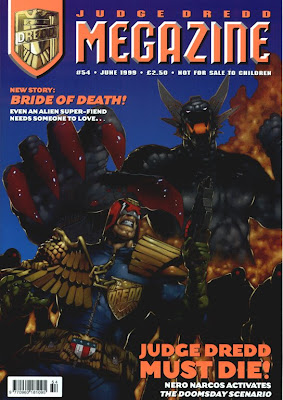 Wagner's solution to the twin-serial problem was pretty smart in theory. "The Doomsday Scenario" concerns a two-front conflict: Nero Narcos has launched his long-planned robot attack on Justice Dept. to take over the city, and Dredd can't help because he's been spirited away by Orlok to stand trial for genocide. We follow him overseas in 2000 AD; we see what's going on in Mega-City One through the eyes of Galen DeMarco, who was the most interesting supporting character available at the time. The Megazine story runs eight issues, i.e. just over seven months, and gets a head start on the 24 weekly episodes in the Prog.

The terminal flaw in Wagner's plan is that the two storylines don't quite join up together with matching, interlacing climaxes (that was a problem with the split narrative of "Wilderlands," too). Up to the point where Orlok takes off with Dredd while DeMarco's unconscious, the stories mesh just fine. But Dredd has to deal with Orlok and the trial, and then come back and deal with Narcos, as I'll discuss more next week. All DeMarco has the power to do vis-a-vis Narcos is spend several months' worth of episodes getting to safety, and Wagner makes her do that as slowly as possible, but eventually he simply runs out of plot for her.

The last two episodes of the Megazine "Doomsday" are blatantly just marking time--you can almost see Wagner sighing as he gives us a silly but gory Citi-Def scene, devotes a couple of sequences to Oola Blint and her husband (another recurring routine he seems to have thought was particularly funny), shifts to Bishop Desmond Snodgrass for a page, recycles the "DeMarco has a fantasy about Dredd" bit from the story's first episode (it gets an amusingly salacious Greg Staples cover, below, the second time), reprises a bunch of material from the end of the 2000 AD story, spends a full page on Dredd showing up at the Judges' secret bonus hideout... and finally hits the last two beats of the story: Dredd's final rejection of DeMarco (at that point, I believe, the Meg could use the word "shit" and the weekly couldn't, which I guess is why it's part of the punch line of two of these eight episodes), and Volt's suicide. Wagner really only needed two pages to do that, and he had 30. 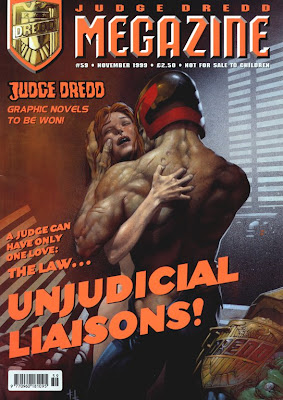 So the parts I enjoy most in D4MC1 are mostly details, like the follow-up to the death of Herriman in Batman/Judge Dredd: Die Laughing: a proposed memorial to him in "the new Mitty complex." (Which is, of course, rejected.) The same scene's single, unreliable Cassandra-as-in-Agamemnon predicting the robot war, though, is a routine we've seen before, and in fact there's something very similar at the beginning of "Day of Chaos"; we also got something similar the previous time there was an episode called "War Games," the Mark Millar-written "oh no look out for Sino-Cit" one. (See also the "War Games" on that "Banzai Battalion" cover I included last week...)

What's really unsatisfying about the material in this volume is that DeMarco is our protagonist, but she doesn't really get to do anything in the back half of the story. What the setup demands is for her to solve a crucial piece of the problem in a way that she can but that Dredd can't, or that she can as a civilian in a way that she couldn't have as a Judge. But she doesn't: she's part of a group that gets to a miraculously functional safe spot, and then literally sleeps through most of the rest of the story.

Nobody else rises up to take over the "what's going on back in MC1" story from her, either. As promising and menacing a figure as Guthrie is in The Pit, when he shows up here he just stomps around for a few pages, then vanishes again. Even Roffman isn't nearly as much fun here as he is in most of his other appearances. In Dredd's narrative, Roffman sometimes gets to be a complicated character--the interesting thing about him is that his cowardice and voyeurism have been channeled in ways that make him a terrific cop. In DeMarco's narrative, he can only be a cowardly voyeur. 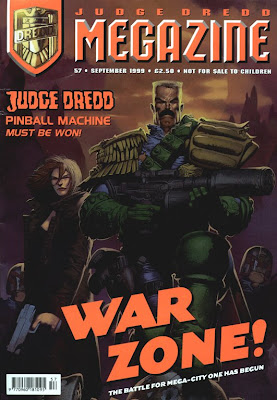 One thing here bothered me at first, but then didn't: DeMarco is much more consistently "sexy-looking" in the opening scenes than she's ever been drawn before--even the slight awkwardness that was still present on her "unzipped" cover is gone, and now she's just wearing peekaboo outfits all the time. What salvages that for me is that she's got a huge erotic print hanging over her bed: having given up the life she wanted most because of the pleasures of the flesh, she's apparently decided that's she's totally going to go for the pleasures of the flesh, dammit. She's also much less guarded about it when she's got nothing to lose; she's happy to make jokes about wanting "Joey" to manhandle her, in a way that she hasn't been before.

I like thinking about how the various Dredd epics fit into the "relationship between the man-as-law and the city" scheme, so here's an idea about this one: "Necropolis" and "The Day the Law Died" were both, in one way or another, about what happens when the man-as-law is corrupt. What Wagner suggests at the beginning of Doomsday for Mega-City One (and then doesn't follow up on in its second half) is that it's about what it would mean for the person-as-law to be sort of corrupt. Look at DeMarco's dialogue in the first couple of chapters: "I only wanted to corrupt you a little!" "You're corrupting me already." When DeMarco's around, rules get bent ("You start getting into intent--and you know how complicated that is"). She actually punches a Judge (in full view of a few others), and gets away with it; for once, common sense wins out in the face of the law. 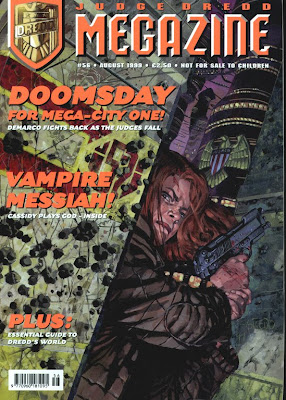 But that also means that she's susceptible to rules getting bent in ways she's not crazy about, and at the end of "Volt Face," she's shrugging and going along with a Justice Dept. cover-up that she acknowledges is genuinely gross. "Volt Face" is a very sharp piece of writing, more than nearly any other part of this volume; the first page's bit with the Narcos curfew being lifted, followed instantly by the Justice Dept. curfew being imposed, is the kind of easy gag Wagner sometimes delights in, but it's no less smart for its easiness. The conclusion of "Doomsday" proper answers the story's initial question ("what happens if the legal authority is sort of corrupt?") in one way that's just pat--Dredd rejects DeMarco cruelly, telling her that she's unwell but treatable--and one way that's irrelevant--Volt's suicide, which is in response to errors he imagines (starting a few dozen pages earlier) that he's made, rather than to anything having to do with corruption. "Volt Face," though, provides a much smarter and darker answer: "what do you mean, if the legal authority is sort of corrupt?"

Next week: the other half of this dyad, Doomsday for Dredd.
Posted by Douglas Wolk at 11:00 PM